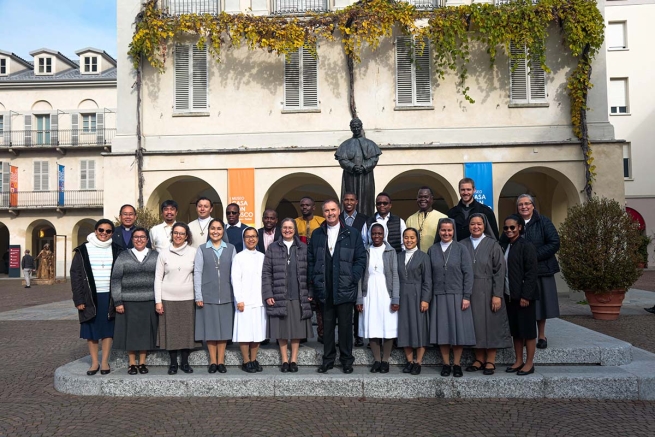 (ANS - Turin) - A traditional and yet ever new gesture was repeated yesterday, on Sunday 21 November, at the Basilica of Mary Help of Christians in Turin: that of the delivery of the missionary crucifixes to the departing missionaries of the 152nd Salesian Missionary Expedition. “As Christians, we are all missionary disciples, called to be witnesses of the truth in the name of the Lord. And you, my dear missionaries, are much more so,” said the Rector Major during the homily of the Mass.

During the homily, after having illustrated the importance of the royal presence of Jesus in the life of each baptized person, Fr Á.F. Artime referred to that 11 November 1875, the day of the first Salesian Missionary Expedition, in which a new path was traced for the Salesians and the youth of the whole world. A path made of love, care, help… which, from Turin spread first to America and then to all the other continents. It is a path that continues today, in the name of Don Bosco, thanks to the missionaries "ad gentes, ad extra, ad vitam" who leave everything to evangelize and educate peoples other than their own in the Salesian style.

And concluding his reflection, he recalled the spirit with which those departing will carry out their mission: “They will go not as teachers, but as servants, in the name of the Lord Jesus, to share life… And in this sharing, they will offer the best of themselves. I find it something really beautiful!” said the Rector Major.

Then the rite of handing over the crosses took place, introduced by the moving invocation to God for the blessing of those departing, in which the Successor of Don Bosco begged for all of them "the heart of Don Bosco and Mother Mazzarello".

The festive celebration, of the Missionary expedition, was made even more solemn by the feast of Christ the King of the Universe this year and thus received even more prominence thanks to the participation of numerous prominent Salesian figures. Beginning with the new Mother General of the Daughters of Mary Help of Christians (FMA), Mother Chiara Cazzuola, who was at her first participation in a similar event, flanked by the Provincial Superior of the FMA of Piedmont, Sister Emma Bergandi, and other concelebrants who assisted Don Bosco's 10th Successor at the altar, including Fr Alfred Maravilla, General Councilor for the Missions, Fr Juan Carlos Perez Godoy, Councilor for the Mediterranean Region, and the Provincials of the same region, who gathered in Turin.

Because of the difficulties still existing for international travel, only 9 out of 23 Salesians and 10 out of 11 Daughters of Mary Help of Christians received the missionary crosses, representing all the participants of the 152nd Salesian Missionary Expedition. The other departing missionaries who were unable to participate in yesterday's ceremony will receive the cross from their respective Provincials, but always on behalf of the Rector Major, the Successor of Don Bosco.

The video of the Mass can be seen on the ANS Facebook page.