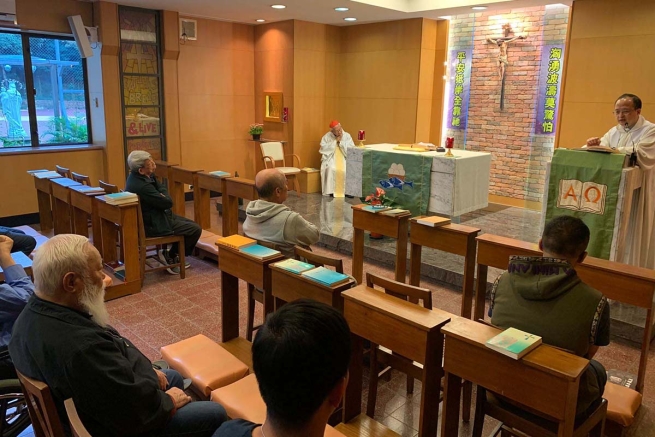 (ANS – Hong Kong) – November 13th - Commemoration of Blessed Artemide Zatti, in Salesian China Province, is our traditional day to hold the Salesian Brothers Day to celebrate Religious Brother vocation. The Salesian Brothers gathered at the Salesian Missionary House in Shau Kei Wan for spiritual and fraternal activities. First, His Eminence Cardinal Joseph Zen shared about the meaning of the vocation of Salesian Brothers, their identity as consecrated persons, in a simple and inspiring way.

After the sharing of Cardinal Zen, the Brothers shared their inspiring vocation stories and the various works they have been engaged in over the past years. Among their shared experiences, they found that whether they were working at the front line or at the background, they tried their best to keep and foster the spirit of Don Bosco and utilize ones’ talent fully to accompany the young in various ways. They deepen their understanding of Salesian Brothers and increased admiration among their confreres.

Before the end of this grace-filled event, they gathered in the chapel to celebrate the Commemoration of Bl. Artemide Zatti led by His Eminence Cardinal Zen and concelebrated by the Provincial, Fr. Joseph Ng. The Gospel of the day is the parable of the poor widow begging the unrighteous judge to avenge her. In his homily, Fr Provincial encouraged the Brothers to learn from that widow and beg the heavenly Father tirelessly to give us more Salesian Brother vocations.

Providentially, the Vocation Office held a vocation gathering attended by more than 20 students from various Salesian Family Schools. After the Holy Mass, the students joined the Salesian Brothers and have a Q and A session about the Vocation of Religious Brothers. Fr. Provincial pointed out that each of the Salesian Brothers have different expertise and skills, which can be used to teach students in many ways. The Salesian Congregation takes the formation of the Brothers seriously to equip them according to their talents which can enable them to engage in the work of education and evangelization.