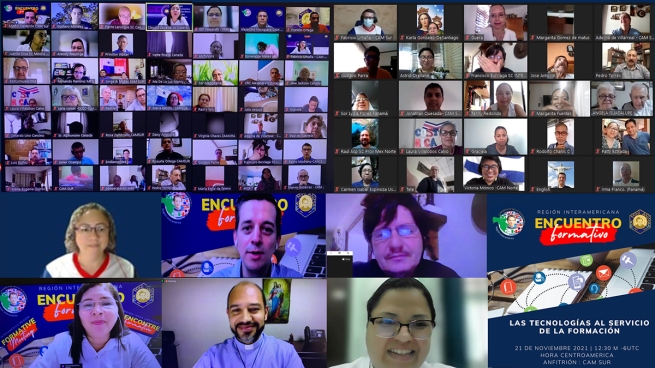 (ANS – Managua) – The Salesian Cooperators of the Interamerica Region, on Sunday November 21, organized an online formation meeting on “New technologies at the service of formation”. Almost 300 Salesian Cooperators took part, coming from the 13 countries that make up the region and other countries such as Spain, Pakistan, Italy, Argentina and India.

Javier Ocampo, coordinator of the Central America - South Province, which is made up of Nicaragua, Costa Rica and Panama, welcomed all the participants. The region’s World Councilor, Francisco Burciaga, also addressed the participants.

The theme was developed through three presentations: a given by Sr. Nazareth Espinoza FMA on “The communicative style of Don Bosco and Mother Mazzarello”, that of Geovanna Dávila, Salesian Cooperator, on “The Church and Technologies of 'Information and Communication'” and finally that of Fr. Javier Rivas SDB, focused on a concrete example of the use of technology, which he created: “Catolico Libre GT, a podcast of Canon Law”.

Each of the speakers encouraged participants not to be afraid to use technology to be communicators of the Good News. The participants were invited to take advantage of technology for evangelization, justice and human respect, communicating with joy in the style of Don Bosco and Mother Mazzarello.

Between each presentation, technological tips were presented to improve the presentation of formation or catechesis.

The purpose of the meeting was to enable participants to identify the possibilities offered by technologies for formation, but also to recognize that they do not replace face-to-face meetings at local centers.

The Salesian Cooperators of Central America South Province presented us a video on their province, highlighting their culture, a significant apostolate by country that composes it, and the number of local centers, of members who have made their promises and of aspirants. It was also mentioned that the Salesian Cooperators of their Province already enjoy the presence of God among them.

The meeting was animated by the Salesian Cooperators of the Central America South Province and by the team of communicators of the region, coordinated by Martín Calderón, regional formation Councillor. This was the third of 9 meetings that the region will hold monthly until July 2022.

This meeting took place in Spanish, with the use in rooms of translators in French and English, to take into account the 3 languages ​​spoken in the Interamerica region. You can review the transmission via Facebook on the SC Interamerica site.