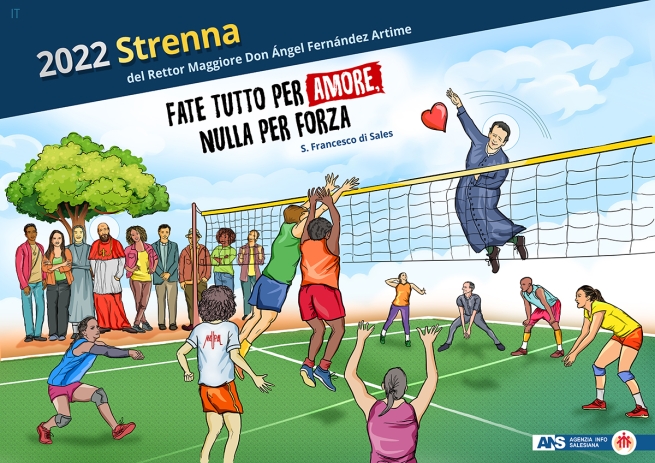 (ANS – Rome) – One of the two choices that Fr Ángel Fernández Artime, the Rector Major, has made to graphically represent his message for the 20221 Strenna – “Do everything through love, nothing through constraint” (St Francis de Sales) – is by Mauro Pallotta, in ‘arte MAUPAL’, the street artist who has become well known for his murals dedicated to Pope Francis. The interpretation this artist offers is an innovative representation of a scene from the Salesian Oratory: Don Bosco at play with his boys.

A Roman, class of 1972, ‘Maupal’ grew up, including artistically, quite literally in the shadow of St Peter’s. He offers a youthful view of Don Bosco, who gives off a magnetic charism. In volleyball, Don Bosco pounds an unusual ball (heart) with exceptional energy. The two teams -- Don Bosco and Blessed Michal Rua – are multi-ethnic: they are made up of boys and girls from around the world. The defensive play of the challenging team, also including  young people from every continent, is transformed into a welcoming act.

In the background, witnesses to the Don Bosco-inspired sharing of love between the two opposing teams, are a smiling Saint Francis de Sales, some young people, a Salesian and a Daughter of Mary Help of Christians. All of this is supported by the luxurious green foliage of a tree nurtured by the same hope that informs the entire Salesian Family.

The setting, as for every Salesian work, has its own great significance: the field represented there is the playground, the privileged place for the encounter between Don Bosco and the young; the sky is the infinite reverberation of a love that needs to go beyond the rules of the game.

The volleyball court also suggests the dynamics of life. Every game assumes that there is someone who wins and someone who loses: but in this case the powerful message in the images proclaims that active involvement is more important than the result.

In fact the game is taking place in an atmosphere of great relaxation: everyone accepts everyone else, and God. Don Bosco is the central player, caught up in an activity that points out the path to take; he leaps above the net, demonstrating his fullness of energy and enthusiasm. The heart that he handles so wisely is the core of the individual, and from which comes each choice and activity. But not even Don Bosco plays alone: because in a game we are not just individuals – we become a team.

Don Bosco's powerful and portentous slam dunk therefore spurs the whole Salesian Family to make the greatest effort to give love without favouritism, in a team game in which each individual is actively involved.