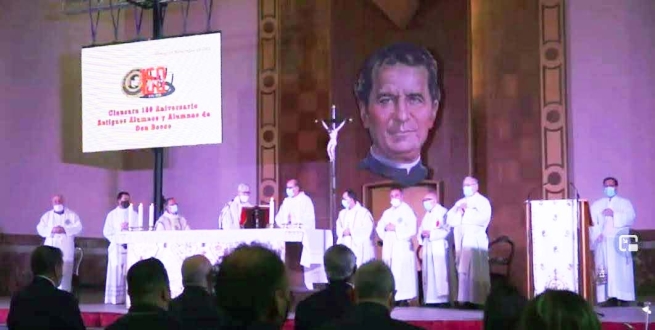 (ANS - Utrera) - On Saturday 20 November in Utrera, the Regional Federation of Past Pupils of Don Bosco of the Southern Zone of Spain concluded the celebrations for the 150th anniversary of the birth of the Past Pupils. Fr Joan Lluis Playá, Central Delegate of the Rector Major for the Secretariat of the Salesian Family, attended the programme. The Rector Major himself, Fr Ángel Fernández Artime, joined the celebrations through a video.

The event was the culmination of a well-thought-out chain of celebratory events, which began two years ago with a competition for logo design and followed up with other publicity and communication initiatives which involved the leaders of the Federation.

The day of celebration last Saturday repaid the difficulties experienced, due to the pandemic. At 11 am, the Eucharist began, presided over by the Episcopal Vicar of the Archdiocese of Seville, Most Rev. Diego Pérez Ojeda, and was concelebrated by a good number of Salesians, including Fr Playá, who delivered an emotional homily with a profound Salesian flavor.

Subsequently, the actual closing ceremony of the anniversary took place, which also represented a tribute to the local presidents of each of the associations that make up the Federation. On the occasion, in fact, a video of each local association was presented and then each of the local presidents was honored with a small gift. This moment was accompanied by a commemoration of the history of the Past Pupils from its origins to its first years of life: Carlo Gastini, Felice Reviglio, Fr Michele Rua, Fr Filippo Rinaldi and, of course, Don Bosco etc., were represented on stage and dutifully honored for what they have given to the Salesian education of entire generations.

After listening to the good wishes of the Rector Major, who congratulated all those present on the anniversary, the newly formed association of Utrera was welcomed, and received the support and encouragement of the 20 associations present and of the nearly 200 past pupils gathered, together with other members of the Salesian Family who shared in the celebrations.

"The past pupils present at the closing ceremony of the anniversary were infused by the spirit of the Salesian pioneers who spread the Salesian charism from Utrera to all of Spain. The penetrating gaze of Don Bosco, who presides over the Basilica of Utrera, has watched over us at all times, and Mary Help of Christians has given us a historic day in every sense," commented the promoters of the initiative.