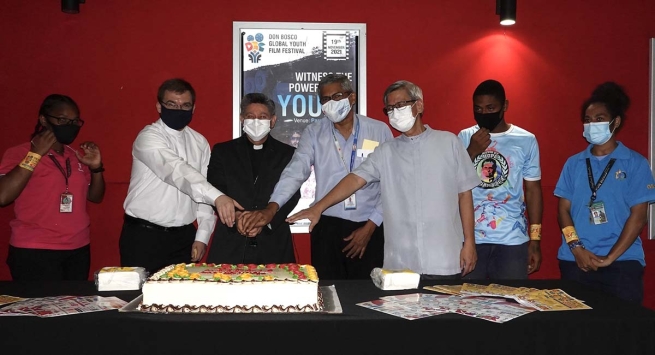 (ANS - Port Moresby) - Last November 19th, fifteen of the 110 short films selected by the “Don Bosco Global Youth Film Festival” were screened at the “Paradise Cinema” in Port Moresby. In compliance with the anti-Covid protocols in force, only a maximum of 100 spectators could participate in the event.

The Apostolic Nuncio to Papua New Guinea and the Solomon Islands, Most Rev. Fermin Emilio Sosa Rodriguez, attended the screening together with his Secretary, Fr Jacek Pinocy Present, as special guests.

Other participants included: Fr Gregorio Bicomong, Superior of the Papua New Guinea and Solomon Islands Vice Province, alongside numerous priests, religious, brothers, and aspirants from the various houses of the Salesians of Don Bosco. Along with them many students, past pupils, and professionals who wanted to show their support to young people also participated in the event. Everyone had the opportunity to reflect on the theme "Moved by Hope", which originates from the Rector Major's Strenna of 2021.

The screening of the short films was facilitated by the "Commission for Social Communications of the Catholic Bishops' Conference" of Papua New Guinea and Solomon Islands and was an occasion for reflection and discussion. During the screening of the films, those present were given the opportunity to truly understand the situations faced by young people in different societies around the world and relate them to a more local context. The public was then challenged to embrace the invitation to be "beacons of hope" for those around them, especially for those hardest hit by the pandemic. They were also encouraged to be people who promote positive growth in their homes and communities.

“The theme is 'Moved by hope'. But who gives us hope? It is God. Hope is one of the theological gifts in our hearts that we cannot keep for ourselves; we must share it. Giving hope is part of human nature. Hope is the most important thing that God always asks of us. We are part of a community, we are part of the Church, and we must build with this hope,” said the Apostolic Nuncio encouragingly.

He also added that he was very happy to be part of the audience and to be able to discover the imagination and creativity of those who made the films because they were all touching and related to everyone's life. He also recalled that many young people, in addition to having to face the pandemic, also have other problems, at home or with their studies; and precisely these young people must know that there are solutions and that there is hope.

“A smile is a very contagious virus,” added Fr Bicomong, quoting Pope Francis. With this statement he wanted to reiterate that a smile is the best instrument of hope and that it can also be used to evangelize people. Finally, he thanked Fr Ambrose Pereira, Secretary of the Social Communication Office of the Episcopal Conference of Papua New Guinea and the Solomon Islands, for organizing the event.

The event is available in streaming on the Facebook page of Radio Maria - Papua New Guinea.