Brazil – Hope-filled Young people with the protagonists of DBGYFF 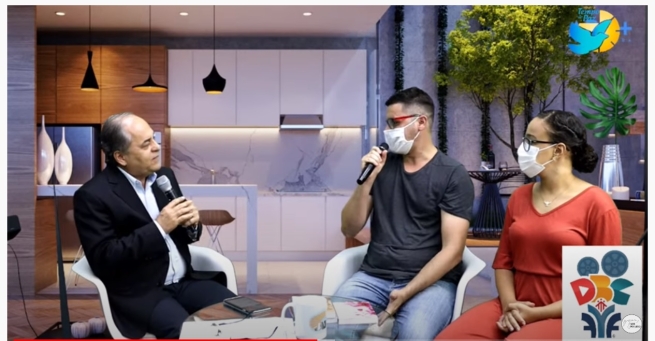 (ANS - Recife) - The “Don Bosco Global Youth Film Festival” is still alive and in progress! The 100 films in the final round remain available for educational and pastoral benefit of the youth groups, in educational ambiance and for media-training. On Tuesday 23 November, some of the winning films were screened live in Recife in an event broadcast live on the social networks of the Province of Brazil-Recife (BRE), and coordinated by the Fr João Carlos Ribeiro sdb, Vice Provincial of BRE and assisted by the young duo Paulo Thiago and Ariane.

Paulo Thiago, as a communication professional, was part of the Festival’s Preliminary Jury, which worked on the selection of the finalist videos. Ariane, on the other hand, is one of the leaders of the Salesian Youth Movement in the Caetés-Abreu and Lima area. In the introduction to the evening, they presented the Festival project globally, with its objectives, theme, categories, selection process, and awards.

The highlight of the evening was the remote participation of six young past pupils from the Salesian High School of Salvador de Bahia - Gustavo Nery, Gabriel Cerqueira, Stephanie Ribeiro, João Vitor Guedes, Maria Clara Oberlander, and Lara Lopes - who participated in the festival with their short film titled Epiphany, which won first prize in the live short category for videos lasting up to one minute.

The short film by these young people, which was coordinated by the Project Supervisor of the Salesian High School, Gustavo Nery, addressed, among other themes, the power of faith capable of provoking in a young girl (Paloma) not only nostalgic memories but feelings that carry into the future. "The intensity of her affection for her friends (Stephanie and João Victor) and her passion for hope transport the character, from a pandemic time to a an ambiance of friendship and hugs," the youngsters explained.

The group tried to convey the message that the bonds of fraternity, joy, and faith in the divine have the power to bring young people and their dreams to reality. Then they narrated how the idea for the film was born, detailing finer aspects of the script and the adventures in the course of the production of the film. The film had been shot in a closed environment of an apartment and, in the end, shifted to the beautiful Bahian coast.

The group, which expressed its intention to continue spreading its message, for the benefit of the Past Pupils, was also asked why they had chosen the title Epiphany. They answered that in the midst of the pandemic, a manifestation of hope represents a moment of epiphany, the revelation of a rebirth.

During the evening, other short films were also shown live and debated upon. Cocorica by the French youth, Flying Machine, the other Brazilian film awarded at the DBGYFF as the best short in the America South Cone region were also screened at the event.

The entire program, produced by the BRE Province in collaboration with the Mission Association “Amanhecer”, reached 2000 views.