Philippines – “Bart” Wins Continental Best for Oceania in the DBGYFF 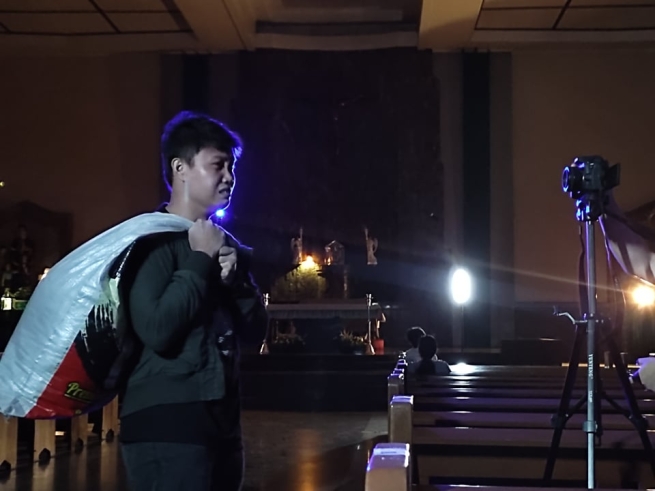 (ANS – Manila) – “Bart” a film made by the team of young people and collaborations of the Salesian Parish of St. John Bosco of Manila-Tondo won the “Best Film from the Continent award” at the World Level Salesian “Don Bosco Global Youth Film Festival”. Ms. Lea Dasigan narrates narrates the excitement on behalf of the team:

It was the last week of August when our team in St. John Bosco Parish - Tondo started brainstorming for the short film which will be our entry to the Don Bosco Global Youth Film Festival.  We were excited to try our luck in showcasing the talent and creativity of the young people of Tondo through the said competition.

However, despite the excitement and eagerness building up in us, our team was faced with the challenge of heightened restrictions due to another surge in COVID-19 cases in the country. Our team, composed of young people and mentored by young adults, ensured that the health and safety of everyone would not be compromised while producing the short film. Maximizing the limited number of people and resources available, as well as time allotted for this project, the very theme of the DBGYFF served as our battle cry: we are “MOVED BY HOPE!”!

The theme itself inspired us to come up with the story of “Bart.” His life mirrors the situation of many of our young people nowadays, especially in the face of the COVID19 pandemic: filled with uncertainty, gripped with fear, struggling in the darkness they are going through. Our story hopes to instill in the hearts and minds of young people the unfading truth that the Lord never gives up on us, even when the harshness of difficulties and trials weaken our faith and dwindle our hope.

Moreover, the story of “Bart” is greatly influenced by St. John Bosco’s story, particularly on how his oratory started on the feast of the Immaculate Conception in 1841. Don Bosco welcomed and befriended Bartholomew Garelli, a poor young boy, who represented many of them during that miserable time in the history of Italy; they were rejected and seen as good-for-nothing. St. John Bosco’s apostolate to these young rascals led many of them to encounter Jesus, and this affirming experience gave them new hope and transformed their lives for the better. And with that meaningful event in Don Bosco’s life happening on a Marian feast, we, who grew up in a Salesian setting, hold on to this belief: it is the Blessed Mother who brought us all together in Don Bosco’s oratory.

Learning from the example of St. John Bosco, we highlighted in our short film how God’s affirming love, as well as the care and protection of our Blessed Mother, ignite the fire of hope in our hearts, giving us renewed courage to face life’s adversities, realizing that we are never alone in facing our battles.

Fast forward to November, it was somewhat funny that when the actual film festival came, we already “lost our hope”; we thought that we failed to make it to the competition. It was only three days after the DBGYFF when some friends from other Salesian communities broke the news that we won as one of the “Six Continental Bests” at the film festival! Such a great and unexpected blessing that we have received!

Our victory as one of the Six Continental Bests in the DBGYFF is an honour that we share, not only with the rest of the Salesian communities in the Philippines but also with the rest of the countries in the East Asia-Oceania Region. This experience of joining an international film festival is a humbling and learning experience for all of us. The strength of our hope will be tested time and again, with the challenges and trials that we will continue to face in this life. But as the Psalm reminds us, the Lord is always at our side, and so we have nothing to fear. (cf. Ps. 118:6) Let us continue to move forward, with hope as our Armor and faith as our shield.