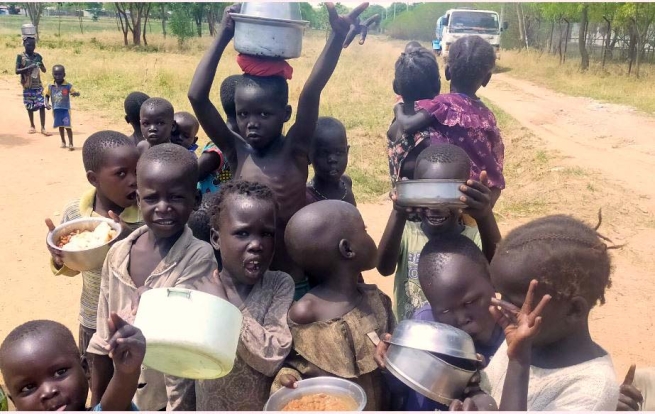 “Your continued support has helped our most vulnerable members of the IDP population to receive food rations and additional non-food items,” said Father Shyjan Job, economer of the Don Bosco Sudan Delegation. “The intermittent rains have affected the IDPs with waterborne diseases such as malaria. Also, many of the makeshift tents are destroyed. We managed to procure the essential supplies and plastic sheets for the temporary shelters for the IDPs.”

South Sudan gained its independence from Sudan in 2011 but has faced an ongoing civil war that started in December 2013 and resulted in a dire humanitarian crisis even before the pandemic. Responding to the civil strife is nothing new to Salesian missionaries in South Sudan, who are dedicated to the programs and services they are providing across the country.

The camp in Juba for those who have been internally displaced has been consistently growing since the outbreak of war and is currently home to more than 10,000 people, mostly women and children. Without this camp, people would be left destitute with nothing to eat, nowhere to go and no access to any form of education.

At “Don Bosco Gumbo”, which oversees the camp, Salesian missionaries provide education, social development services, nutrition programs, and health clinics for poor youth and their families. For some, the education offered at Salesian schools is the only opportunity to gain an education and the skills necessary for future employment.