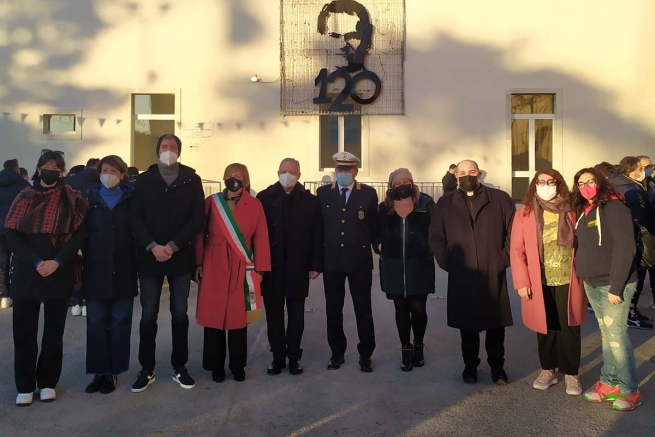 (ANS - Corigliano d’Otranto) - Last Saturday, 4 December 2021, the Salesian house in Corigliano d’Otranto turned 120 years old. To celebrate this anniversary, the educational and city community gathered for a Mass of thanksgiving to God, which was followed by two other important events: the inauguration of the "Buona Stoffa" Day Center - realized thanks to the support of the Association of Social Promotion “Piccoli Passi Grandi Sogni” and to numerous donors involved in the project - and of the multipurpose hall of the Salesian Youth Sports Clubs; and, later, the conference entitled: “120 years with Don Bosco and with young people”. The Councilor for the Mediterranean Region, Fr Juan Carlos Pérez Godoy, also took part in the day of celebration.

The conference was attended by Giovanna Coccioli, lay manager of the Corigliano d’Otranto work; the aforementioned Fr Pérez Godoy; Fr Angelo Santorsola, Superior of the Southern Italy Province (IME); and Francesco Cicione, President of the company “Entopan”, all introduced by the institutional greetings of the Mayor of Corigliano, Dina Manti.

Emotions and communion of values, visions and perspectives characterized the dialogue with several voices of an inspired conversation on how the Christian renewal of society passes through the concrete implementation of the teachings of Don Bosco, placing at the center education, inclusion, the realization and authentic desires of young people, objectives highlighted and supported also in the Mission and Vision document of the Corigliano d'Otranto work, approved by the Provincial Council chaired by Fr Santorsola.

The conference came to the end of an intense day of events in which the spirit of family, the taste and flavor of home and the presence of God was deeply felt, transmitted by many educators, in every area. The whole day was a celebration of gratitude for what was done in the past, but above all for what is being lived and experienced today for the benefit of young people.

Don Bosco rejoices today for all the "memory of the heart" which is still alive and tangible today.