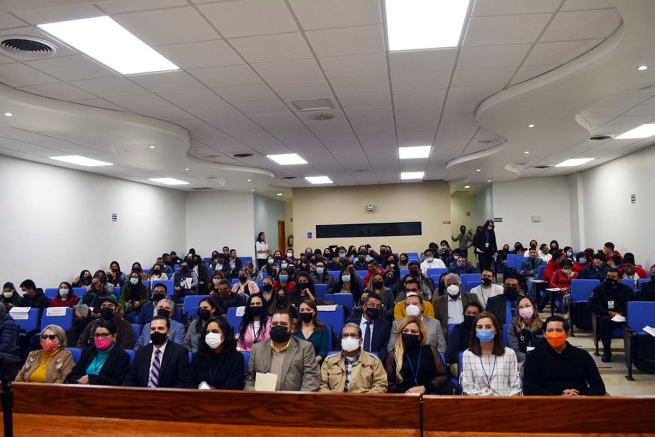 (ANS - Ciudad Juárez) - In order to create links and proposals for global and interdisciplinary support to reduce the effects of the pandemic on young people, the Salesians of "Desarrollo Juvenil del Norte A.C." and "Red Tira Paro" organized the Forum: "Walking with young people", which took place on 2 and 3 December in the auditorium of the Autonomous University of Ciudad Juárez (UACJ). It was a meeting of dialogues with young people to support the process of building the social fabric with the active participation of young people, representatives of the academic world, authorities and civil society.

The work of these two days took place in four round tables on four different themes, in which the young people shared their thoughts and experiences.

Julissa Quintana, for example, shared her very strenuous distance learning experience, in which she was unable to find empathy from the teachers, while many of her classmates could not connect due to the lack of the Internet.

“Young people, this is your space, this is your moment” were the words of Fr Ernesto Hernándezm SDB, before reading the conclusions presented by the young people as the closing of this forum.

Some of the conclusions drawn up by the young people were:

• Accompany young people who have left their studies and motivate them, through special programs, to return to the educational cycles.

• Generate community and cultural spaces for young people living on the street.

• Have a comprehensive prevention policy that excludes no one.

3. Effects on the world of work.

• Young people have the right to decide whether they want to work and study at the same time.

• Asking young people for too many previous work experience prevents them from accessing work.

• Being young does not authorize exploitation.

• Think of young people in a positive way and not just in a negative way.

• Create dynamic programs, where it is possible to go beyond the problems of one's environment.

• Depression and suicide should be viewed as a social problem and not as an individual problem.

“Thank you for having raised your voice and represented not only the youth, but also society ... You are society and we cannot make a change without you,” were the concluding words of Fr Hernández.

The meeting, which was attended by students and teachers also from other higher education institutes in the city, ended with a thought by Fr Francisco Cervantes, representative of the Salesian Province of Mexico-Guadalajara (MEG), who affirmed that they, people, are to fight for causes, not institutions. “This is only the beginning, all this will have to be seen in an agenda, in the commitment of many people ... And it will also have been seen in Salesian growth,” he added.