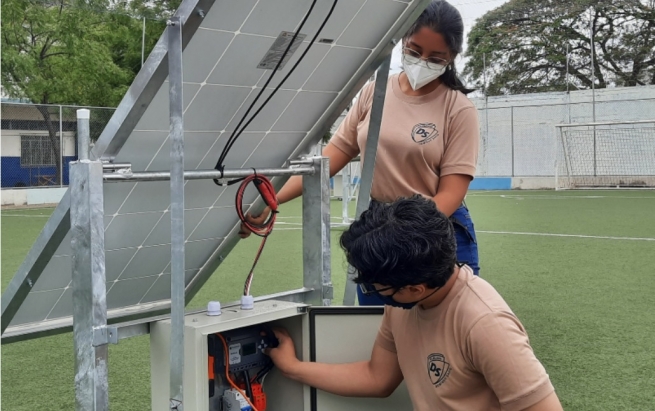 (ANS - Guayaquil) - When Alison returned to the facilities of her beloved institution, the Dominic Savio Educational Unit, to begin the second quarter of her final baccalaureate year, she was in for a big surprise. It wasn't just her classmates that looked different, but also the labs. In fact, eight solar panels had been installed there, which, along with the renewable energy system, are now part of the special electrical installations lab implemented by the institution. A sustainable and lasting future is indeed the goal that students, educators, authorities and Salesians of the Dominic Savio Educational Unit of Guayaquil have as their main objective to commemorate the institute’s 60th anniversary.

Pope Francis continually reiterates the urgency of taking action to address the environmental emergency. Likewise, accompanying young people towards a sustainable future is a task strongly recommended by the Rector Major of the Salesians. As a result, Salesian communities and works in Ecuador are committed to raising awareness and educating about this mission.

The implementation of solar panels at the Dominic Savio Educational Unit is not an isolated step. On the contrary: it is accompanied by the possibility for students to get used to and “own” alternative and renewable energies, an option that provides future graduates with an additional advantage in technical competence and for their professional future.

The Vice Chancellor, Maria Eugenia Carpio, underscored that this new module has several positive implications for the students: it allows them to prepare for the new and challenging reality they must assume not only as qualified professionals, and it also educates them as good Christians committed to an integral ecology. "We want to go further," she emphasized. Likewise, the authorities recognize that this is not an individual task, since the Salesian Polytechnic University of Ecuador is also a strong ally in every sense for this and other proposals. And in the same way, she emphasized the support of the Salesian Province and especially the international alliances with organizations such as the Belgian NGO "ACTEC", which financed the modules put into operation.

Public bodies have also shown their support and interest. This was evident after the visit to the new modules by the Vice Minister for Education, Cinthya Games, who committed the Salesian work to setting up future round tables of dialogue and work to reflect on new profiles of technical bachelor's degree, based on the use of renewable and sustainable resources.

"It was a unique experience for me," said Alison Games, who is part of the first class of students to use solar panels. The young woman also pointed out that today's society demands "saving money and not harming the environment" and expressed that she would personally like to specialize in the use of this type of energy.