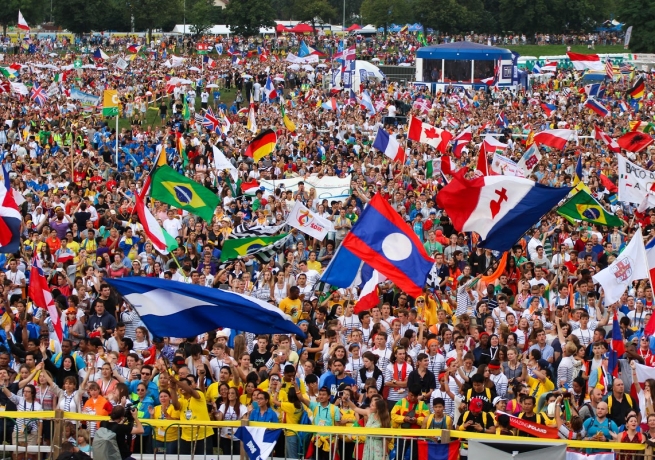 With these words the Archbishop of Krakow, Cardinal. Stanislaw Dziwisz, welcomed the 500,000 young people who filled the esplanade of Blonie, in a riot of flags and colours that accompanied this first official event of the 31st World Youth Day, in a peaceful climate and with an impressive turnout of the security forces.

As always the young people, among them 5600 young people from Salesian centres worldwide, responded enthusiastically as they braved the rain that fell just as they were reaching the park.

Mother Yvonne Reungoat, Superior General of the Daughters of Mary Help of Christians, along with the Provincials of Poland and many FMA sisters were present among the young people, sharing this profound experience.

In his homily Cardinal Archbishop Stanislaw Dziwisz asked young people to bring to the world "the spark of mercy", starting from their homes, from the countries where they will return next Sunday, in situations often marked by hatred and conflicts, with open wounds in the heart of humanity.

We think immediately of the Middle East and of forgotten Africa, of the walls that divide Europe, of the victims of the last insane attack at Rouen in France, a few hours earlier. Pain, shock and worry have replaced hope and faith. The only possible answer is to continue to build the culture of encounter and dialogue. It is the only way forward so that the world may no longer be inhabited "by selfishness, violence and justice" and that "the civilization of goodness, reconciliation, love and peace may be reinforced on the earth."

"Bring to the world the good news of Jesus Christ" - concluded Cardinal Dziwisz At the end of his homily he said: "Bear witness that it is worthwhile entrusting our fate to Him and that it must be done. Open wide to Christ the doors of your hearts."

Fr Ángel Fernández Artime, Rector Major, and some of the General Councillors are in Krakow to attend the various events of World Youth Day including the World Day of the Salesian Youth Movement (SYM) with the SYM Forum and SYM Festival.