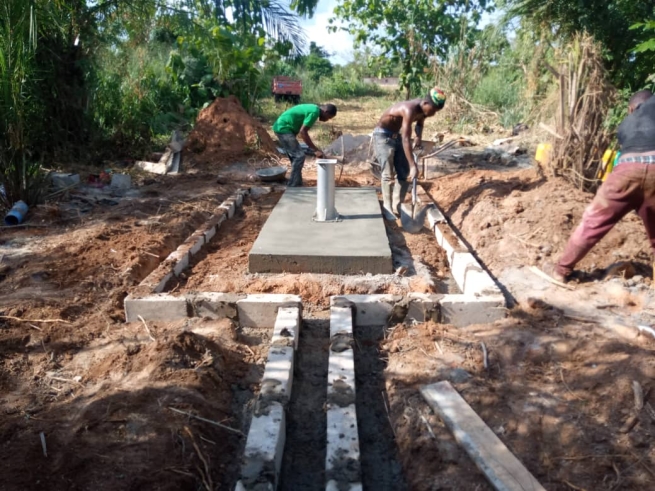 (ANS – Sunyani) – Close to 2,000 people living in four villages in the Bono region of Ghana have access to clean water thanks to donor funding from Salesian Missions, the U.S. development arm of the Salesians of Don Bosco. The project, part of the Salesian Missions “Clean Water Initiative,” provided new boreholes and hand pumps to the villages of Tummea Meenko Odumase, Yafnnu Ntekasa, Kwame kra krom, and Chiraa-Akwasua.

Water remains one of the main challenges in the Bono region. Access to the nearest available water sources is several miles from these villages. The farmers who live in the region depend on stream water for all their needs and have to share it with grazing animals. The health and social implications of utilizing this water are having devastating effects on the community.

This water project improves the access to quality and potable water for the villages that are part of the Odumase Mary Help of Christians Parish under the Catholic Diocese of Sunyani. The parish has 16 outstations and 22 villages.

U.N.-Water estimates that worldwide 2.2 billion people are living without access to safe water. One in four primary schools has no drinking water service, with students using unprotected water sources or going thirsty. In addition, U.N.-Water notes that more than 700 children under age 5 die every day from diarrheal disease linked to unsafe water and poor sanitation.

“Water is essential for life, which is why Salesian Missions has made it a priority that Salesian programs around the globe have access to safe, clean water for the health and safety of those we serve,” said Father Gus Baek, director of Salesian Missions. “Improving water access brings a sense of dignity to children and families and reduces the number of waterborne illnesses.”

While Ghana’s economy continues to improve, nearly 45 percent of the population lives on less than $1 a day, according to UNICEF. Rural poverty remains widespread in the dry savannah region that covers roughly two thirds of Ghana’s northern territory. Small-scale farms suffer from a lack of infrastructure and equipment, both of which are needed to shift from subsistence farming to more modern commercial farming which would yield greater incomes and a chance to escape poverty.

To learn more about the Salesian Missions Clean Water Initiative, go to SalesianMissions.org/water