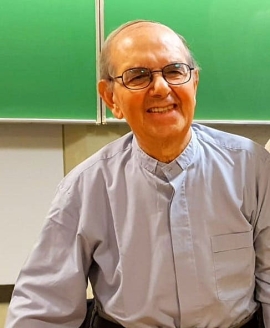 (ANS - Buenos Aires) - Last Saturday, 8 January, at the age of 77, the Salesian Fr Francisco (Francesco) Leocata, "one of the great Argentine philosophers of the twentieth century", as he was defined, passed away. Many Salesians and lay people, his former pupils, admired in his teaching his clear communication skills and his realistic intellectual identity, accompanied by a great openness to reading, research and investigation aimed at knowing and probing the different points of view, in an attempt to save, with a healthy critical attitude, the positive aspects of the various positions.

Fr Leocata was born on 28 July 1944 in Catania, Italy, but at the age of 10, he and his family reached Argentina, a country that would become his homeland. He attended the Salesian aspirantate and entered the novitiate in Morón de la Frontera in 1960. On January 31 of the following year, he made his first religious profession, confirmed with the perpetual profession on 31 December 1966 in Uribellarea. He was ordained a priest on April 3, 1971, in Rome, where he also obtained his licentiate in Theology.

In 1977 he founded the "San Juan Bosco" Faculty of Philosophy and Educational Sciences in Buenos Aires, also becoming its first Rector.

He served in various Salesian communities in Buenos Aires, such as Santa Catalina, San Antonio, Pius IX, in the "Editorial Don Bosco", at the San Francisco de Sales and León XIII houses, working as a teacher and principal.

In 1985 the then Rector Major, Fr Egidio Viganò asked him to teach at the Salesian Pontifical University (UPS) in Rome, where he remained until 1987. He subsequently taught at the Salesian Center of Studies in Buenos Aires (CESBA) in the Faculty of Philosophy and Theology, and at the Catholic University of Argentina, where, in addition to teaching, he also served as Director of the Department of Education and Scientific Research.

Fr Leocata had a vast teaching experience at all levels and as regards the teaching in Philosophy he stood out as a skilled researcher and leading figure in the recovery of the memory of Argentine Philosophy, managing to offer students and readers a broad view, able to enhance the precious work of other authors and to offer interpretative keys to think, broaden debates and vision and explore issues in-depth.

A prolific author of several texts and a high-level essayist, he spent the last years of his life in the community for Salesians “Artemide Zatti” in the Almagro district of Buenos Aires.