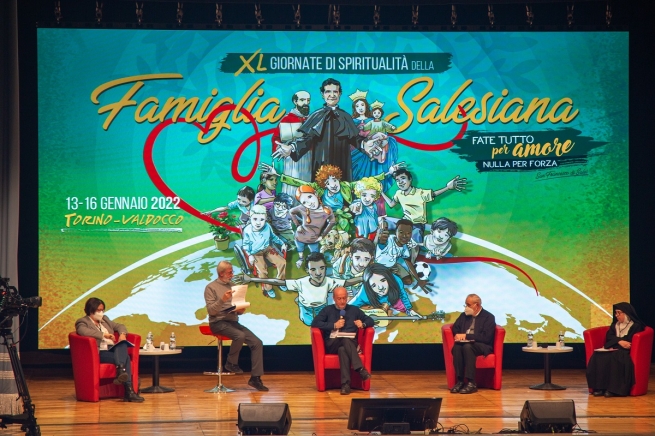 (ANS - Turin) - Conferences, when they are a due or fitting tribute to a theme or a person, proceed with the weight of something that is done a bit by force. The Days of Spirituality of the Salesian Family give a completely different impression: they are taking place in Turin-Valdocco under the banner of a lightness of manner that takes nothing away from the effectiveness of listening. And this is not only to give truth to the title assigned to the Strenna of the Rector Major "Do all through love, nothing through constraint", but because the person at the center of the meeting is St. Francis de Sales, champion of friendship and gentleness.

The speakers on the afternoon of Friday 14 January were able to bring together with simplicity this doctor of the Church, who generated the experience of Don Bosco. Fr Michele Molinar presented the “round table, with four voices to observe such an extensive personality from different points of view.”

Vania de Luca, Vatican news officer of Rai, the Italian public broadcaster, addressed the first step, that of a saint elected as the patron saint of communicators. The creativity that St. Francis de Sales had “in a hostile time and context, in the face of new problems that challenged the Church and the world" did not produce old answers, but "communicated the faith through the new media of the time, to heal the religious and political fractures in a Europe in search of peace.”

Sister Maria Grazia Franceschini, of the Order of the Visitation of Saint Mary, went a further step by referring to the gaze that the bishop of Geneva turned to the problems of his diocese, therefore to the brothers in the faith, and in particular to those who are consecrated. “The causes of the decline are in the loss of common life, from which, among other things, the lack of separation from the world, a fundamental element of the religious choice, derives.” But there was no need for authority to intervene, it was rather necessary to rekindle friendship in the convents.

Fr Giuseppe Roggia took a further step, examining the mode of action chosen by Saint Francis de Sales: “It is necessary to start from the realism of life, not from cultural theories and presuppositions. It is necessary to acknowledge that all human life is made up of many opposites, but also to discover that there is a vital center appointed to bring order, as an inner balancing center of gravity. The magnetic point that brings about the harmony between action and contemplation is an impulse of charity.”

Fr Eunan McDonnell was able to close the circle of reflection by mentioning the “spiritual affinity between Francis de Sales and Don Bosco.” From the intentions made by the young Piedmontese cleric to the ability to then attract young people to himself through gentleness and loving-kindness in his action as a priest, everything was based on the model of charity and affability constituted by the teacher of friendship who was the meek and irreducible Saint of Annecy. “But let it be clear: it is the Salesian charism that John Bosco chooses, rather than the latter the charism,” he specified.

In the dialogue at a distance in time, but close in the Holy Spirit, between the two champions of Christian life, the numerous Saints and Blesseds who the Salesians already number among the confreres, the sisters and the laity associated with their service were inserted. Fr Pier Luigi Cameroni, Postulator General for the Causes of Saints of the Salesian Family, also pointed out the 53 cases currently underway involving 173 candidates for canonization, together with this year's anniversaries: a gallery of figures that confirm the universal call to holiness, each of them capable of showing an inner passion that led them to imitate those who traced a sure path to eternal life.