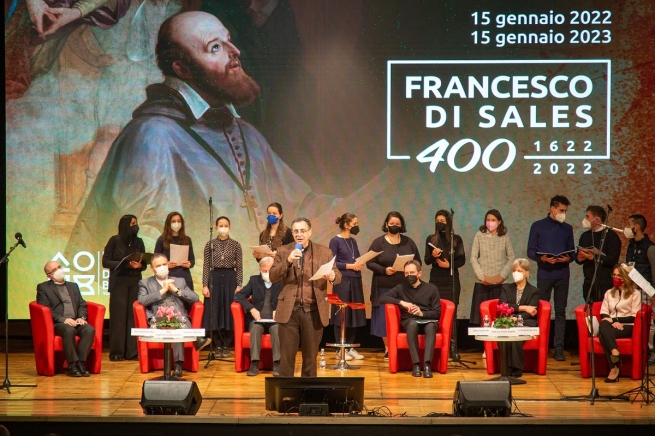 (ANS - Turin) - St. Francis de Sales dialogued within the Church, even with his brothers separated by the Reformation, and with the "lay" world. For this reason, 400 years after his death, it is not only the religious world, inspired or questioned by his holiness, that is concerned with him, but also society in its various spheres. The Rector Major of the Salesians, Fr Ángel Fernández Artime, wanted an exhibition on his figure in order to keep open a relationship with the exponents of cultural life, and so the Days of Spirituality of the Salesian Family dedicated the morning of Saturday 15th to a round table on the Saint. Invited to listen to the civil and religious authorities, experts were given the floor to present an exhibition that will occupy the temporary spaces of the Casa Don Bosco Museum in Valdocco for the whole of 2022. Speakers included the Archbishop of Turin and Bishop of Susa, Msgr. Cesare Nosiglia; the Provincial of the Salesians of Piedmont, Valle d'Aosta and Lithuania, Fr Leonardo Mancini; and his Vicar, Fr Michele Molinar.

Fr Michael Pace, Deputy Director of the Museum, spoke of the Saint as a "Renaissance giant" that involves - both for his family origins and for his pastoral action - a vast community between France and Italy, and from here the whole Church.

The exhibition presents a portrait of the saint to the public for the first time, as highlighted by one of the curators, Fr Cristian Besso. "Historical documents state that that oil painting was done in Annecy 'in live pose'. It is an exceptional work at least from a historical point of view" since it is like a photograph of his face. "Owned by the Visitandine nuns, it passed to the community of Lyon and then to the community of Turin following the turmoil of the French Revolution." This is not the only precious item of the exhibition: there are also two chasubles worn by St. Francis. "With the first he celebrated the Eucharist in the months of his illness in Turin, a few months before his death. It belongs to the Shrine of the Consolata and it is likely that it was made with aristocratic fabrics from the Savoy court of Duke Charles Emanuel I. The second was embroidered for the saint by Mother Jeanne-Françoise Frémyot de Chantal, co-founder of the Order of the Visitandines."

Another ancient portrait of St. Francis de Sales, commissioned by King Carlo Alberto to open the pantheon of the Savoy state in which 54 clergy, scientists, statesmen, diplomats appear, from the Middle Ages to the Modern Age, is kept in Turin. The director of the Royal Museums of Turin spoke about it, Enrica Pagella, who invited to see it on the spot since it was not possible to detach it from the large frame that the artist Pelagio Pelagi created to hold that portrait gallery. But this gives reason to weave a closer relationship between the Salesian museum in via Maria Ausiliatrice and the state museum in Piazza Castello, already embodied in an itinerant laboratory that takes visitors from the Royal Museums in Valdocco following the theme “Court boys, courtyard boys”, announced by the director herself.

Stefania De Vita, Director of the Don Bosco House Museum, highlighting the culture of St. Francis de Sales, underlined that "he loved music, art, religious painting in particular, in full line with the dictates of the Counter-Reformation". And also his way of expressing himself willingly and effectively resorted to plastic visions: “Expert communicator, through images he carried out a great pastoral work of evangelization.”