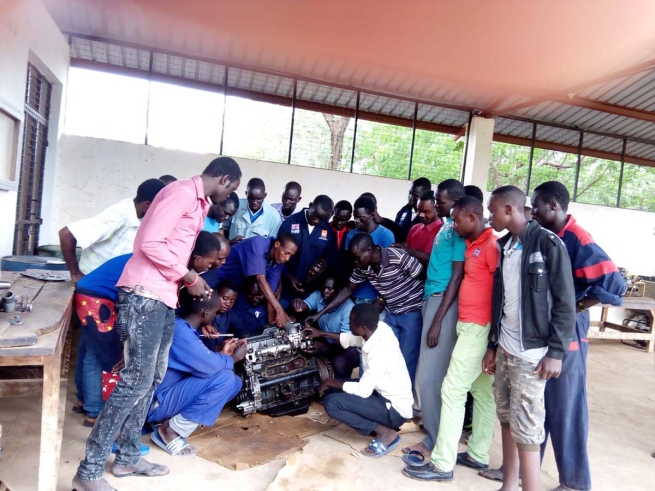 (ANS – Kakuma) – Some 831 kilometers Northwest of Nairobi lies Kakuma refugee camp, the second-largest in Africa after Dadaab. The camp was established in 1992 and is currently a home to refugees in the region of 225,000. These refugees come from nine countries including South Sudan, Sudan, Somalia, Congo, Rwanda, and Burundi. It is estimated that more than 50% of the general population of the refugees are youth and children. The stories of refugees are sad ones, yet full of hope.

Some of the refugees have gone through serious traumatic experiences that include violence and even the death of their loved ones owing to political instabilities in their countries of origin. A good number of refugees live with little or no hope of going back to their countries. The irony of it all is the joy and hope that are always registered on their faces. This joy is so evident in their welcoming attitude as well as in colourful liturgical celebrations.

The Salesians of Don Bosco have a variety of mission activities in the camp. Notable among them is the spiritual services to the refugees. In the camp, the Salesians run the only Catholic Parish (The Holy Cross Catholic Parish). The Parish has ten out-stations that are spread across the camp. There are two priests in the parish, namely Fr. Jose Padinjareparampil (Rector and the Parish Priest) and Fr. Eric Owuor, who doubles as the Assistant Parish Priest and Local Economer. With the help of two Jesuit Priests who work with the refugees, the parish is able to offer the possibility of the Holy Eucharist every Sunday to all the outstations. “As part of the pastoral program of the parish, we organize frequent youth seminars and workshops that are very handy in human and Christian formation to our young refugees,” says Fr. Eric Owuor, SDB.

Given that the vast majority of the refugees are youth and children, in 2014, the Salesians came up with an initiative to accompany the children through a program dubbed ‘Savio Club’. The aim of this initiative was to facilitate the faith formation and character development of the little angels in the camp. Mr. Kelvin, a Catechist in the Parish, observes, “there is an incredible difference between the children who have been through the Savio Club and the rest. They are very active in the church, are well behaved and also perform way better in school.” The number of children who are members of this club is over 1,000 per year.

The Salesians of Don Bosco offer spiritual services to different schools that are run in the camp. This has given them a latitude to reach out to other youth and children who are not necessarily their students or members of the parish.  We also take care to give catechism lessons in the schools.

Another important aspect of the Don Bosco mission in the camp is to offer technical skills to the refugees. With the help of UNHCR, the confreres run the Don Bosco Technical Institute in the camp. The courses offered in the program are: Masonry, Electrical and Solar, Motor Vehicle Mechanics, Plumbing, Dressmaking, Welding & Fabrication, Secretarial, Computer, and Literacy programs. Br. Benedict Njagi, SDB, is the principal of the technical school.

To increase the efficiency and access to the training, the Salesians run four other centers across the camp that offer the same services. Over the years, the Salesians have equipped over 3,000 refugees per year with technical skills that have enabled the young to earn a living both in the camp and in the countries of origin and repatriation.

Salesian Presence Beyond the Camp

The host community of this camp are the Turkana people. The Turkana people of Kenya are basically nomads who rear animals such as goats and sheep. Given the harsh climatic conditions (semi-arid) they are not able to engage in much agricultural activity. The pastoralist nature of this community has rendered the illiteracy rates very high as the children find themselves in the bush to look after the animals. As a community, they often consider themselves as marginalized by the government and policies.

The Salesians of Don Bosco have seen the needs of the community and are establishing a technical college just outside the camp, in the town, but close to the camp, to cater to the needs of many young people. In fact, a section of the college is already operational with programs of Carpentry, Masonry, Electrical and Solar, Motor Vehicle Mechanics, Fitter & Turner, Plumbing, Welding & Fabrication, Computer and Literacy programs, besides the professional courses under KASNEB – Certificate, Diploma and Professional course in accountancy, credit management, etc.

The construction of the Institute is made possible through the generous support of BMZ through Salesian Mission Bonn, BMZ through GIZ and Slovak Aid through SAVIO.   Salesian Mission, of New Rochelle, USA, has helped in the extension of the Salesian residence. We are looking for funds to complete the construction of the final phase (administration block - ground floor; classrooms, and library – first floor; and the multipurpose hall – second floor).  This would bring completion to the project. We are very grateful to the Rector Major and his council, and the Provincial and council for their keen interest in this institution and the help they provide.

Notable in the new Salesian presence are the sports facilities namely multipurpose court (basketball, netball, volleyball court) and football pitch assisted by GIZ. “We really look forward to seeing, in the next few months, a lot of young people flooding this compound for oratory activities,” says Fr. Jose Padinjareparampil, the Rector.

Bro. Stephen, the practical Trainee, organizes the Youth Centre in the main Centre, while together with our teachers, we are able to organize the youth Centre in Don Bosco 1 in the camp. The confreres have a chance to be present among the youth in a special way during these moments.

Challenges in the mission

Among the challenges the Salesians face in their mission among the refugees is the shortage of personnel. As earlier noted, the Salesian mission spreads across the camp and, therefore, it is a big challenge for the few Salesians to offer ‘a quality Salesian presence’ to the young refugees. Another recent challenge to the Salesian mission has to do with the infrastructure. 2020 saw destruction of some workshops and classes by the collapse of the banks of the flooding rivers as they eat into the compound of Don Bosco 1.

Despite these few challenges, the zeal of the Salesians for the mission has not reduced an inch. The Salesians in the camp and the entire Province of Eastern Africa are very grateful to all the benefactors that continue to aid this beautiful mission to the extremely needy youth.