Poland - "Don Bosco and Mother Mazzarello are alive in our midst!" 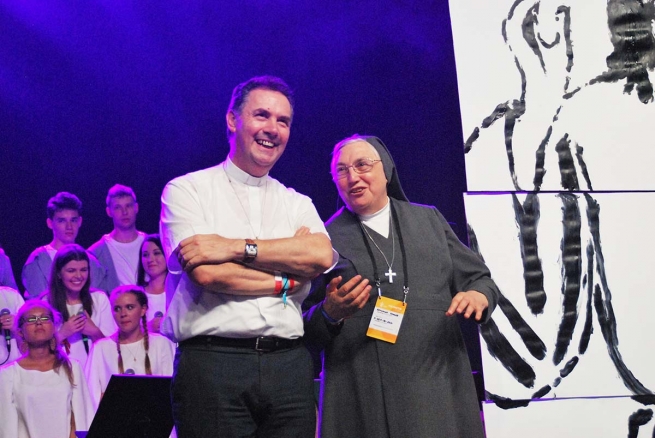 (ANS - Krakow) - The second part of the SYM Forum was celebrated in a joyful festive atmosphere. After lunch the EXPO Fair in Krakow began to fill with about six thousand young people from 55 countries.

For four hours the EXPO halls became a big Valdocco courtyard. The young people presented games, dances and folk songs. They made the words of Don Bosco come true: "a lively playground, a dead devil." In one of the rooms, the Blessed Sacrament was exposed for adoration.

After supper they all gathered in a larger room for prayer before the Blessed Sacrament exposed on the altar. The vigil was led by the Petroklezja campus ministry group from Płock. Later there was a short performance on the life of St Faustina Kowalska and how to perform the works of mercy in daily life.

The meeting ended with the Good Night by Mother Yvonne Reungoat and Fr Ángel Fernández Artime: "We are all Salesians and all carry in our hearts the spirit of Don Bosco and Mother Mazzarello." These words of Mother Yvonne were received by the young people with great enthusiasm. She continued, "Jesus, Don Bosco and Mother Mazzarello will speak personally to every one of us in a special way during these days."

Fr Ángel Fernández Artime told all the young people, from different parts of the world, that he wanted every Salesian house to be another Valdocco and another Mornese, with Salesian activities that will lead young people to a personal encounter with Jesus, so that He can touch their hearts.

The day ended with an Ave Maria recited in different languages.