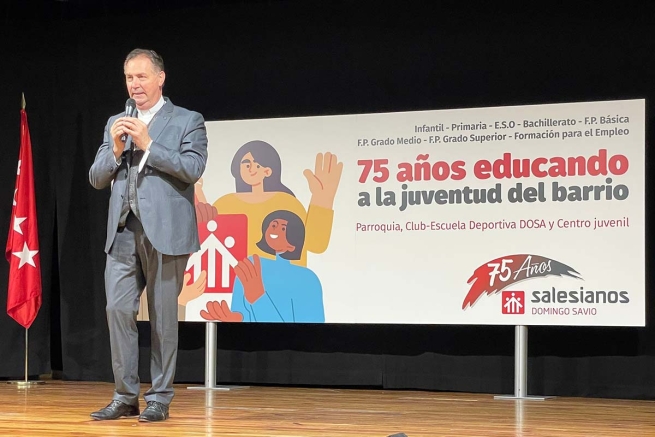 (ANS - Madrid) – Before circa 300 educators of the schools and social platforms of the central area of the "St. James the Greater" (SSM) Province, the Rector Major of the Salesians, Fr Ángel Fernández Artime, addressed several issues on the situation of young people today, the response of Salesian works, and the role of the laity in the Salesian mission. The meeting was held on January 21 at the theater of the Salesian work "Dominic Savio" in Madrid, as part of the inauguration of this Salesian presence’s 75th anniversary.

Fr Ángel Fernández Artime, when asked if the Salesian Congregation is responding to the needs of young people, strongly affirmed that "we have not betrayed Don Bosco". He added that he sees "a desire for charismatic fidelity" throughout the Congregation and asked that "throughout the Salesian world that in case of doubt (about the closure of some works) we look to the neediest."

In this sense, he revealed that, in recent years, "the Congregation has not approved any presence that is not for people most in need." For this reason, he encouraged educators to "be on the side of those who need us most" and, referring to this year’s Strenna to the Salesian Family, he encouraged educators "to be courageous in the proposals we make for young people." For this reason, he underscored the importance of believing in young people, caring for each one of them, "looking at who is the most fragile." In his dialogue with educators, he also affirmed that the Salesians believe in the laity because "there is no other way to achieve the mission," since they too are part of Don Bosco's dream, he said.

The Rector Major praised the great professionalism of the educators, their vocation, and encouraged them to grow in their charismatic identity. "Young people need you," he said at the end of the meeting. "They need teachers of life." Fr Á.F. Artime concluded by thanking the work and vocation of the educators "because together we make possible the dream that the Spirit raised in Don Bosco."

The Provincial of the Salesian "SSM" Province, Fr Fernando García, concluded the act by thanking the educators for their work, especially in this time of the pandemic, and emphasized that "the most important thing we have is people; it's you."

75 years of educating the neighborhood’s young

The meeting with educators was a prelude to the inauguration of 75 years of Salesian presence in the "Ciudad Lineal" neighborhood of Madrid. The Rector Major and the General Councilor for the Mediterranean Region, Fr Juan Carlos Pérez Godoy, had arrived in Madrid in the morning to open this anniversary.

The announcement and inauguration of this anniversary were made by the Rector of the Salesian work, Fr Manuel de Castro, who thanked God and Mary Help of Christians for "the excellent work that has been done here" with the mediation of so many Salesians and educators and he renewed the pastoral educational commitment of the entire educational community.

Fr Fernando García highlighted the origins of the house as a Festive Oratory, later expanded as a school. Margarita Álvarez, the first woman to enter the center as a teacher in 1976, was then in charge of pronouncing the anniversary proclamation. Inviting us to look at the past, Ms Álvarez recalled the origins in 1947, when the Salesian Rómulo Piñol arrived in the neighborhood and began playing games with the boys in a vacant lot in the area during those first years, there where in 1948 he opened the first classes, which 75 years later became a school with all levels of education, specifically Vocational Training, Youth Center, sports school and parish.

An oratory at the origin of this Salesian house

The opening ceremony of this anniversary was also attended by Pedro Huertas, Secretary-General of Catholic Schools, who encouraged everyone to "put the Gospel into the hearts of young people"; Pilar Ponce, President of the School Board of the Community of Madrid, said "education changes lives and you have changed the lives" of many people and the neighborhood. For his part, the Rector Major spotlighted a challenge for all Salesian work: "to be another Valdocco," alluding to the origins of the Congregation, which was also an oratory in that neighborhood of Turin.

The Rector Major encouraged them to continue to believe in young people and declared open the 75th anniversary of the Salesian work. The event, held in the school's theater and in front of about 350 people, concluded with the first performance of a new hymn to Don Bosco, to the rhythm of reggaeton, by parish priest and songwriter, Toño Casado. "Soñando con Don Bosco" is the title of a catchy song that the author performed and other boys and girls from the center sang and danced to. The day ended with the Rector Major blessing a painting dedicated to St. Dominic Savio.