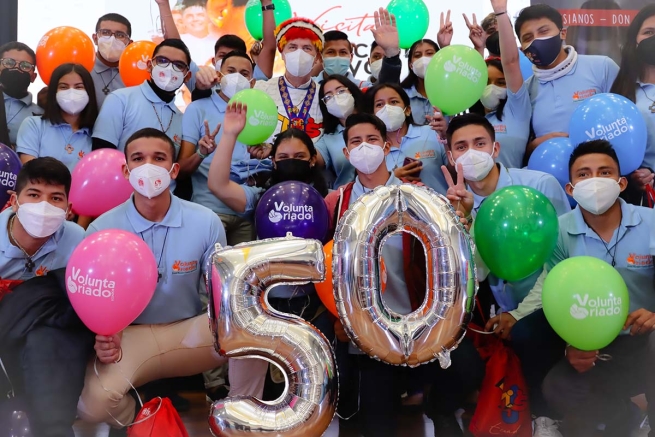 (ANS - Quito) - The last day of the Rector Major's visit to the "Sacred Heart of Jesus" Province of Ecuador (ECU) began on the morning of Friday 11 February with the celebration of the Eucharist with the Salesian Rectors in the chapel of the Provincial House. Salesians from various other communities also joined in this celebration through the Zoom platform.

The meeting with the Salesian Youth Movement (SYM) of Ecuador took place at 9:00 in the gymnasium of the Salesian Polytechnic University - "El Girón" campus. There, to the rhythm of the song "He lives, Don Bosco lives", the Rector Major was welcomed by hundreds of girls and boys from the Costa, Sierra, and Amazonia regions, in an atmosphere of great joy, thanks to the presence of today’s Don Bosco among them.

Before the start of the planned program, a young Achuar girl from the Wasakentsa community turned to Fr Á.F. Artime and offered him chicha, a typical drink of this Amazonian culture, a symbol of the feast that united young people as brothers and sisters in Don Bosco.

The Rector Major then spoke on the theme: "Young disciples and missionaries on the move"; addressing those present with the sweetness of a father, he said: “If there’s something that identifies Salesian youth it is the fact that they are young people who dream of being able to do something beautiful for others. I’m convinced that the Lord Jesus needs you as young people of today ... Secondly, I’m convinced that Don Bosco needs young people capable of doing something for others; and thirdly, the boys and girls who come after you not only need you, but also have the right to have the same opportunities that you are having: not to be alone, to feel that there are friends I can trust; that is, others come after you who need you! This is what Pope Francis calls being missionary disciples of Jesus.”

Joselin Ampan from the "Sevilla Don Bosco" Oratory in Macas was also among the event’s participants, who came to the meeting with great enthusiasm. Speaking of Fr Á.F. Artime he said: “We feel he is like just one more young man among us; that is, an extra animator or catechist who will always help us, with words of encouragement, who tells you: 'Come on, you can do it'.”

“Having the Rector Major here is something that makes all young people happy and we who accompany them! It is magnificent that Fr Ángel is among the young Ecuadorians,” were the words of Deivid Muentes, who works as a religious assistant of the SYM of Manta.

The meeting ended with the presentation of various artistic performances, where young people showed all their talent in dance and music.

The last appointment of the Rector Major's visit to ECU took place on the afternoon of Friday 11  in the "Turin" theater of the Don Bosco Technical Institute in La Kennedy, where Salesians and laity with positions of responsibility in the various works gathered around Fr Á.F. Artime.

The theme of the meeting was: "Walking together: formation and mission". In this perspective, the Rector Major addressed the participants with very clear words: “As a Congregation, we have no other way than that of the mission done together: Salesians and laity. This path is the most effective, it is the richest, it is the one that generates the most life, it is the one that helps the most.”

And in the final part of his speech, he added: “I deeply believe in you, I deeply believe in the great value of the journey we are making together. Thank you for your service, your generosity and your professionalism in favor of the mission.”

Among the participants in this gathering, there was also Cristina Gallegos, Coordinator of the Pastoral Department of the "Don Bosco" Educational Unit of Macas. After listening to the Rector Major, the message she took away with her is that “not all of us are good at everything, but by joining forces, joining our characteristics, we can contribute a lot to the Salesian mission and we must believe that it is possible, that we are not only doing a job, but we are also part of a great mission, of Don Bosco's dream.”

From the community of Simiatug, Fr ​​Giovanny Pichucho also moved to participate in this meeting, and wanted to leave a message to the Rector Major: “Thank you for accepting this challenge of being Don Bosco and guiding us in this century, which has its difficulties and also its hopes, and thanks for helping us to be a sign of love and hope for our young people.”