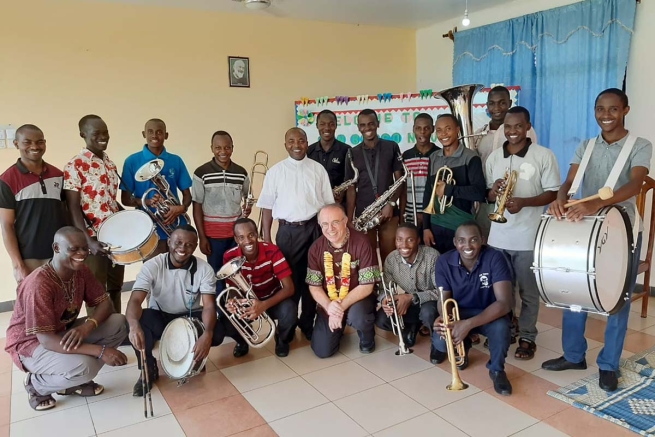 (ANS – Morogoro) – The Tanzania (AFE province) novitiate in this strategic Catholic stronghold of Morogoro has been opened since 2009, with Fr Joseph Boniface Minja as its Rector and Novice-Master. Thanks to the prestigious Jordan University College, in this city of 434,000 people (urban area) between the capital of Dodoma (350 km) and the largest city of Tanzania, Dar es Salaam (200 km), Salesian novices from Sudan, South Sudan, Kenya and Tanzania come together from five different aspirantates and two pre-novitiates of the AFE Province. A few years ago, some other provinces (LKC, AFM, ZMB) were also sending their novices to Morogoro.

The novitiate was the fifth community that welcomed Fr Václav Klement during the Extraordinary Visitation of the AFE Province (February 11-16). A brass band of novices with the typical African walking/dancing procession celebrated the first moments on arrival. At the heart of these three full days were the encounters with formators and novices, both in groups and in personal time of mutual listening: “What motivates you on your vocation journey? What are your challenges and dreams? What fills your heart with joy as Salesian of Don Bosco?” - these were the main topics of personal sharing.

Emerging among the dreams of Eastern Africa novice is a strong drive to become truly credible, authentic and holy Salesians who are close to the needs of today’s young people; to be a Salesian who doesn’t forget to pray amidst the many apostolic activities; some also nurture missionary dreams; to share a loving heart for youth-at-risk (their pre-novitiate was spent among the street children of Nairobi, Kenya) and  to foster mutual peer support among novitiate companions for their whole life.

A community of four SDBs (three priests and one practical trainee) is accompanying some 15-20 novices every year from August to August. During this formation year, there are seven novices from Tanzania, six from Kenya, and one from South Sudan. A large Don Bosco compound of 18 acres accommodates a large oratory sports facility, an agricultural and animal farm, and a green garden around the novitiate building. The presence of two FMA sisters and the provincial house of SMI (Sisters of Mary Immaculate) enhances the feel and spirit of the Salesian family in Morogoro.

Together with five lay mission partners the novices are involved in manual work on a daily basis as well as working in the Oratory with hundreds of youths being welcomed every day. An integral formation is made up of daily personal moments of prayer (in common), apostolic involvement on Wednesday (catechism class in nearby primary and secondary schools serving 1500 youths) and on Sunday there is animation of youth groups in seven outstations and two Catholic parishes of Morogoro. There are also classes of musical instruments and the community brass band. The common language is English, while Swahili is used in liturgical songs, readings, and daily life in society and Church.

The vocations blessing in Tanzania is very encouraging and also demands more consistent commitment in formation. All eleven communities in Tanzania are slowly preparing for a start of a new Province, based on deeper and stronger charismatic roots. Indeed, the youth animation and ministry of the Salesians is very much appreciated in this country and only with a greater and new generation of Salesians may the Congregation respond to so many invitations from many corners of Tanzania (940,000 km2 and a population of 65 million).