Ukraine – Together with young people in a very delicate moment 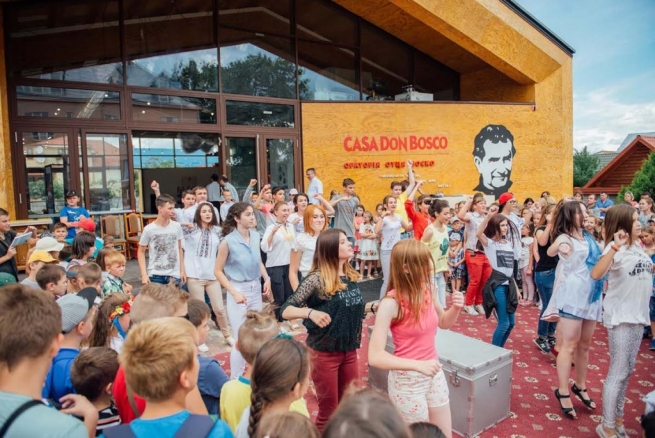 (ANS - Kiev) - In these days of exhausting waiting and uncertainty, life flows by quite normally in Ukraine: people go to work, students are at school, in Salesian houses people attend Mass and attend the oratory. The tension, however, is undeniable, and it is for this reason that the Salesian Family becomes the bearer of moral and material aid to young people and the entire population.

On January 26, the day on which the Holy Father asked the entire Church to pray for peace in the former Soviet country, the youth of the Salesian house "Mary Help of Christians" in Kiev gathered to share a faith stronger than fear. "Those who are believers have a ray of hope, they do not feel alone. But those who do not believe, those who have not been able to experience God, because let's not forget that communism in Ukraine tore the foundations of human faith, live it in a very heavy way. Our oratory is becoming the home of everyone," testified Fr Maksym Ryabukha, Rector of the Kiev house. It should be noted that the commitment also has an ecumenical dimension, given that the initiatives are carried out in dialogue with both the Orthodox Church and the Catholic communities of the Byzantine rite.

Thus, the Salesian house in Kiev, which has a youth center and is also involved in university pastoral work, is proving to be a refuge for many: Catholics, Orthodox, and even many non-believers. Young people pass the word around to each other using social networks, sometimes involving their families as well. And the group grows larger, day by day, and the young people gather, in groups of 100, every evening to pray a Hail Mary together and receive a "good night" thought, in the style of Don Bosco. They have been doing this every day for over 300 days, that is, since the Ukrainian crisis flared up again.

Even in Zhytomyr, a city about 110 km west of Kiev, where the Salesians animate the "Vsesvit" school and are trying to develop a modern oratory, people pray for peace and try to allay fear through dialogue. "Of course, we talk about the situation with the students," notes Nataliya Nagalevska, 48, an Italian language teacher at the Salesian school, "but above all, we pray for peace. Every Monday we promote a common prayer with the whole school. Our children pray a lot and theirs is such a sincere prayer! They prayed for the Covid-19 pandemic. And now they are praying that this crisis will not lead to conflict."

And even in Lviv, a city very distant from Kiev, in the westernmost part of the country, just 70 km from Poland, the Salesians report a suspended and tense climate: in recent weeks the Salesian school has had to interrupt lessons several times because of bomb scares, which fortunately turned out to be all false. "But they create havoc and disrupt the whole educational system because the children have to interrupt their studies, go home and cannot return to school until the police have checked the whole building," testifies Fe Yuri Smakous, 39, a priest, Principal of the secondary school run by the Sons of Don Bosco, where about 400 students aged 10 to 17 study.

In Lviv, the Salesian house also includes a family house that takes in 65 children and young people who are orphans or from families in serious difficulty, aged 6 to 18, and runs a vocational school with various courses, from hotel management to carpentry. The house is directed by Fr Andryi Bodnar, 39 years old, originally from Lviv, who comments: "Clearly, here in the west we do not feel the same tension as in the east."

On the eastern front, however, in Dnipro, Ukraine's third most populous city, not far from Donetsk territory, resides Salesian Fr Oleh Ladnyuk, who has been called as military chaplain to Ukrainian troops at the front since 2014, when the Donbas conflict broke out.

He normally travels between villages in the area to offer Salesian youth ministry courses in Greek Catholic parishes. "We organize summer camps, I would also like to offer training courses for young animators in these areas." Yet, now, with the parish priests of the territories and in collaboration with Caritas engaged on the front line, he is thinking about how to organize the evacuation of the inhabitants, starting with children, in case of war.

As for the approach with which the citizens live these moments, Fr Ladnyuk shares, finally: "All the journalists who come to Ukraine think they will find panic among the citizens. But we have been living in a state of conflict for eight years. We are afraid, of course, but it is now everyday life for us. Foreign journalists do not understand why they see us so serene... We are tired, really tired, of being afraid."