Vatican – Presentation of the “Marega Collection”: thousands of documents on feudal Japan 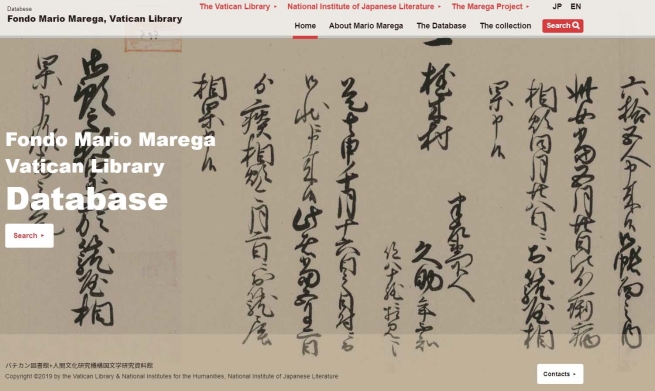 (ANS – Vatican City) – Thousands of ancient rolls tell the story of anti-Christian persecution in Japan between the 17th and 19th centuries. They were restored and digitised with the collaboration of Japanese cultural institutions. The Salesian missionary Mario Marega brought them to the Vatican Apostolic Library in 1953. Scholars now have a window into Edo Japan.

“As history would have it, the largest feudal archive outside Japan is now conserved here in the library,” said Card José Tolentino de Mendonça, librarian and archivist of the Holy Roman Church, during the press conference held on Tuesday, 1st March, at the Vatican, to mark the end of the restoration and cataloguing of the Marega documents.

In his view, “The documents preserved in the Marega Collection are fundamental for reconstructing the history of Japanese Christianity. But their historical value goes far beyond this context. The documentation produced constitutes a nuanced portrait of Japanese society in the pre-modern era.”

This important cultural treasure is the work of an Italian missionary, Salesian Father Mario Marega, who lived in Japan between 1930 and 1974. Responsible for the Italian translation of the Kojiki, the oldest chronicle of Japanese myths and legends, Fr Marega was a great scholar of Japanese culture and local history.

Through a network of personal contacts, he collected thousands of jō, i.e., “crushed” rolls of paper, in which – after the Edo shogunate banned Christianity in 1612 – the local daimyo (feudal lord) in Bungo (today Usuki, Ōita prefecture) continued for decades to write reports on the families of first Christian converts.

In addition to providing accounts of the anti-Christian persecution, the mass of documents offers a much broader insight into what was the reality of rural life in Japan in pre-modern times.

In 1953, Fr Marega managed to send all the collected material in 108 boxes to the Vatican through the apostolic nuncio to Japan. But for a Western library, the collection was difficult to manage.

These documents were simply warehoused for many years, until they were rediscovered in March 2011, which led to the Marega Project, centred on collaboration between the Vatican Library and a number of Japanese academic organisations, including the National Institutes for the Humanities (NIHU).

Thus began a long process of inventory and restoration that involved numerous entities. Collaboration with Far East experts was fundamental for the restoration of materials since ancient Japanese handwritten papers react, in fact, differently to treatments.

Bishop Cesare Pasini, prefect of the Vatican Apostolic Library, stressed the symbolic value of the collaboration with the Japanese partners. “By working together on documents that bear witness to a persecution that lasted two and a half centuries, it was possible to build a common experience,” he explained.

This “took the form of an exchange of expertise and which was broadened and deepened in mutual knowledge and esteem.” Indeed, “We like to express this positive experience under the name of cultural diplomacy: culture enables us to establish relations and to deal with even the most delicate or thorny issues with finesse and accuracy.”

In fact, “Even where history has inflicted wounds or known contrasts or pitted us against one another, we can build understanding and acceptance, harmony and respect, by researching and investigating, explaining and contextualizing, and making respectful memories of everyone and everything. And we get to know the lives of peoples even better. Not a random message, least of all in our times.”

The entire collection was finally digitised and now scholars will be able to access the various documents online for their research.