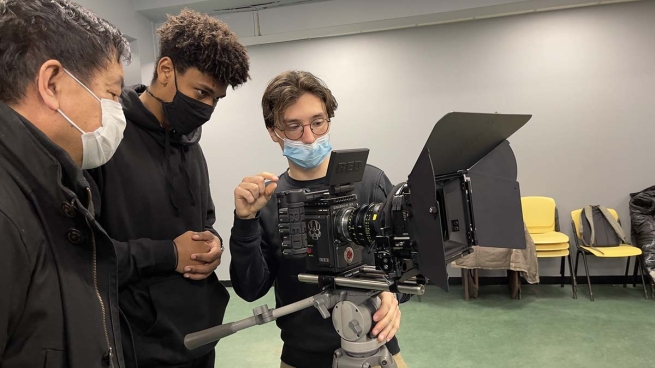 This idea of collaborating started three years ago by three individuals, namely, Fr. Conrad Pesso SJ, Sandra K. Rana, and Fr. John Paul Swaminathan SDB to enhance research and educational processes at both institutions and thereby expand the academic spectrum and culture awareness between the institutions, students, faculty, and staff.

Salesians of Don Bosco and Jesuits are known for their reputation in the field of education. Both have the same style of education which focuses on the whole person, in preparation not only for a career, but for the fullness of life. In the history it is the first time they come together to develop a strategic partnership to promote media-oriented research and joint diploma courses.

Intensive course in media, including concept creation, story development, scriptwriting, pre-production, production (filming) and post-production. While The St. Xavier’s Students are in Paris, they will get a chance to choose 3 international workshops of their choice in the following subjects:

Completing the first year Diploma at XIC and Master’s in Paris:

Following the signing of a partnership agreement, DBIMA-Paris and St. Xavier College in Mumbai started a pedagogical exchange in the form of two workshops, given by DBIMA's Direction and Cinematography professors to the students of the Film & Television department and the Journalism & Mass Media department of XIC (Xavier Institute of Communications St. Xavier College).

About thirty students worked for three days with Mr. Jean Achache (Director) and Mr. Didier Soubrier (Director of Photography) in the studios of St Xavier College. Motivated and passionate, the students were able to put into practice the theoretical teachings received in Mumbai. The contribution of European professionals allowed them to deepen their knowledge of notions such as lighting connections, the sequence of shot values, the shooting of an interview or the construction of a television subject. The professional equipment made available by St Xavier’s College allowed the two professors to involve the students and make them responsible for their aesthetic and technical choices.

This first collaboration between students and professors of the two schools is just beginning, as this spring, students from XIC-St Xavier’s College will join the DBIMA campus in Paris to attend either specialized workshops or a second year of master’s studies in film.

“We believe in the potential of the media as a tool for integral development. This remains the guiding factor in our striving for professional excellence. Our approach will transform students, slowly but surely, into ‘people who truly know how to live and contribute to our global human community in the field of media’” the promoters state.

DBIMA is organizing an open-house on 26th March 2022 and those who are interested can join us at 12h00 noon for the FRENCH TIME this Saturday.