Ukraine - Salesians' unstoppable dedication to education, youth and all those in need 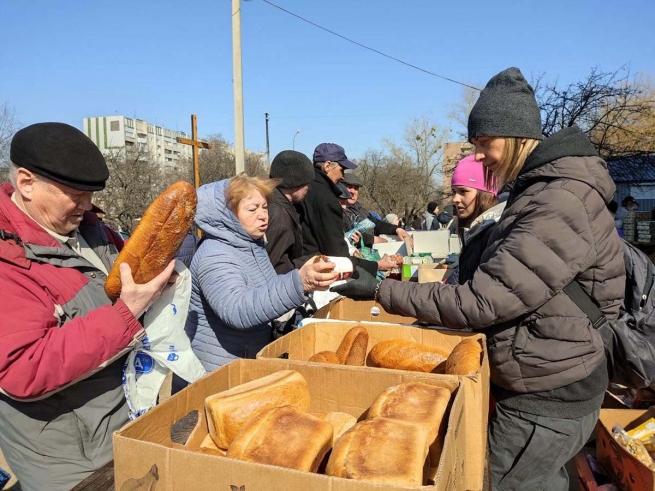 (ANS - Lviv) - When it comes to resilience and tenacity, everyone today should take the Salesians in Ukraine as a model. Despite the continuing war and all the consequent difficulties, they stubbornly continue to offer education and work for young people; and, putting the needs of others before their own, they share every resource and every good that comes their way with those who are put to the test even more severely by the war.

In fact, Fr Mykhaylo Chaban, Superior of the Vice-Province of Greek Catholic Ukraine (UKR), tells us that with the aid truck that arrives in Lviv once a week from Slovakia, "we bring food and medicine to the hardest hit areas, such as Kharkiv, Dnipro, or in the Lugansk and Donetsk region... Each time more and more we become aware of new places that need food."

Furthermore, he continues, "with the support of the Salesian Mission Office of Bonn, we send bread to Kharkiv every week, and we will certainly increase the quantities as soon as our new bakery is up and running" - the one being built in Lviv thanks to a project supported by ‘Don Bosco Mission Bonn’.

Work is in full swing and is always and only aimed at helping others: with the help of the Salesian Mission Office of Lugano, work is being done on the house of Lviv that was planned right at the beginning of the war, to adapt their large structure to offer a refuge to those who have nowhere to go. The work should be finished within a month and the structure will also serve a part of the city's neighborhood.

The Salesians remain active on the educational level as well: "We are trying to work with the youngsters through sport, we have done the first training sessions,"  continues Fr Chaban. "We have allowed ourselves to start these sporting activities to help them slowly get out of the stress of the war. And we shall also try to involve the refugee children and youngsters."

In the Salesian family house in Lviv, in fact, seven new children have arrived, both from the surrounding region and from the war zone. And the Salesians are also continuing their service of accompaniment abroad: "We sent another group of mothers with children to Valdocco. Forty-three people have left," concludes the UKR Superior.

Also in Lviv, schools remain active and committed to the education of young people. The high school and the Vocational Training Center conduct their classes online, and about 80% of the total of about 550 students participate in the courses, some even connected from abroad.

The Salesian school "Vsesvit" of Zhytomyr also still continues to teach, always online, and with a participation rate of 90% of the student population, which ordinarily was about 200 students. Certainly the war has deeply marked the condition of this institute: 50% of the pupils and 20% of the school staff are abroad and the oratory, which has been functioning regularly since mid-March, sees between 4 and 8 young people present...

Distance learning is also used in Odessa so as not to abandon the education of young people: the Salesian school has 120 students, about half of whom attend lessons, mostly from abroad. If it hadn't been for the war, a kindergarten would have opened in April, but given the circumstances, the number of students who signed up was minimal, so there was no point in doing so.

While in Bóbrka, also in Ukraine, but in a Salesian house dependent on the Polish-Cracow Province (PLS), the Salesian community remains active in the animation and spiritual support of the population. Moving are the images of the church partially cluttered with boxes containing humanitarian aid, but filled above all with the faithful who, last March 25, in communion with the Pope and many other bishops and priests from around the world, participated in the liturgy of consecration of Ukraine and Russia to the Immaculate Heart of Mary.