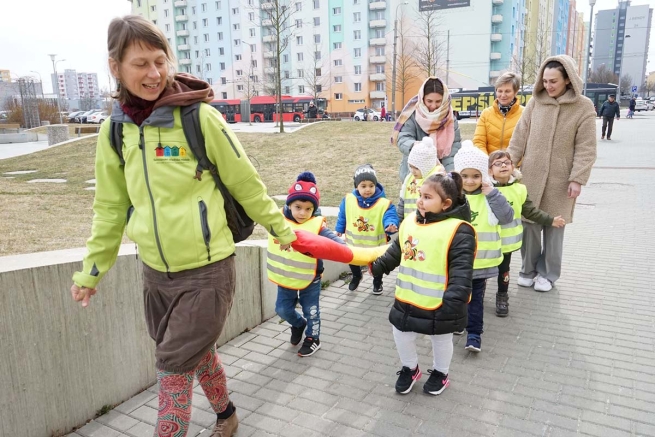 (ANS - Warsaw) - "The desire to help comes from the heart. We have seen the images of these people, of the refugees, and we can do nothing but pray and help." Christoph, a German professor who came to Poland with other colleagues and compatriots to bring medicine and relief to Ukrainian refugees, expresses very well the spirit that animates the many volunteers who for many weeks have been helping the Salesians in their humanitarian work towards the citizens fleeing from the war in Ukraine.

The volunteers show the goodness of their hearts even in their 24-hour service along the borders. "When a car arrives, or if there's a truckload of aid to be unloaded, all you have to do is make a call and they arrive in no time," says Fr Zenon Latawiec, principal of the Salesian school in Przemyśl. "Today, looking at the pictures of our halls, it might seem that the oratory is full of products, but in fact it is full of hearts," concludes the Salesian with a touch of poetry.

Every family fleeing war, every refugee welcomed has their own story. In the beginning, to some children it may almost have seemed like an adventurous journey, an outing with their mothers as the fear was not immediately apparent; but after a few days, the same children ask themselves: "Why isn't Daddy here?". And the answer to the senselessness of war for the Salesians can only be a renewed commitment to solidarity and the creativity of charity.

On Thursday, April 7, there was a meeting of the Religious Congregations active in Poland to share information about their work on behalf of the war-affected population. On the Salesian side, Fr Piotr Sosnowski, SDB, Provincial Vicar of Poland-Warsaw (PLE), spoke about the work and processes carried out by the Salesians. On this occasion, the Sons of Don Bosco were recognized as the Congregation with the largest relief operation underway and also the most organized, systematic, and coordinated.

In addition to material aid, the Salesian homes are also concerned with the mental well-being and serenity - as much as possible - of the new arrivals. For this reason, the Polish children who habitually attend the oratory of the Warsaw Provincial House organized a theatrical performance to entertain and cheer up their new Ukrainian

Other news of Salesian commitment and help comes from the Province of the Czech Republic (CEP). Fr Vojtěch Sivek, Vicar and Provincial Delegate for Youth Ministry, reports the increase in the number of children and young people who are attending tutoring classes for school insertion: they are now 450. The same students are helped with spiritual support and prayer proposals.

Finally, from the Salesian Province of Santa Rosa in Peru (PER) comes another testimony of true generosity: while the country is once again being put to the test by economic difficulties, which have become more difficult due to the inflation generated by the war in Ukraine, the Salesians of that Province have sent the General Coordination for Emergency Management a significant sum of money, collected through a campaign carried out among the Salesian centers of the Province. Along with the cheque "there is also our solidarity and gratitude for all the effort you are making in the name of the Congregation to be Samaritans towards these brothers who are suffering the consequences of an unjust war," said Fr José Valdivia, the Provincial Economer.