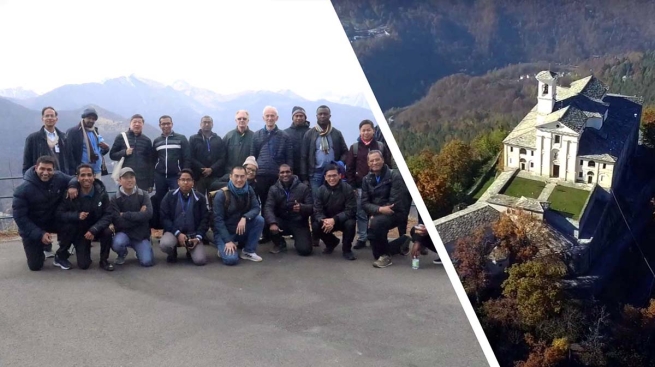 (ANS – Pessinetto) – On Friday, 9 April 2022, the participants and facilitators at the School of Salesian Spiritual Accompaniment (SSA), currently in progress in Turin, visited the Sanctuary of Sant’Ignazio sopra Lanzo.

This visit was the climax of the first week of the programme, which consisted of reflection on the spiritual history of Don Bosco with inputs and visits to relevant places. The morning sessions began with inputs that were offered by Giuseppe Buccellato, followed by visits to the locations such as the Casa Don Bosco Museum, the Church of St Francis of Assisi, and the places of the "Wandering Oratory", guided by Fr Michael Pace. The afternoon hours were spent in personal reflection and group sharing facilitated by Fr Fabio Attard.

The visit to the Sanctuary of Sant’Ignazio was aimed at highlighting the influence of the spirituality of St Ignatius of Loyola on Don Bosco, and the latter’s commitment to the annual spiritual exercises.

A little chapel was originally built by the people of the locality around 1622 soon after the canonisation of St Ignatius of Loyola. In 1677 the Jesuits had become owners of the chapel. About 40 kilometres north-west of Turin, the chapel is situated not far from the village of Lanzo, at a height of about 920 metres. Eventually, the Jesuits replaced the chapel with the sanctuary of Sant'Ignazio, completing the construction in 1727.

Sadly, following the suppression of the Society of Jesus in 1773, the Sanctuary was neglected, even though it had become the property of the Archdiocese of Turin. However, since 1814, the Sanctuary fell under the care of the Rector of the Church of St Francis of Assisi and the Convitto Ecclesiastico. The priests attending the Convitto were thus greatly influenced by the spiritual exercises of St Ignatius.

The sanctuary of Sant’Ignazio sopra Lanzo soon became a centre of Ignatian spirituality in and around Turin. In fact, the Congregation of the Oblates of the Virgin Mary was founded by Bruno Lanteri in 1816 in Turin with the mission of offering the Ignatian Spiritual Exercises to clergy and to laypeople.

In 1842, at the end of his first year at the Convitto, Don Bosco in the company of Cafasso went, perhaps for the first time, to the Sanctuary of Sant’Ignazio for his Spiritual Exercises. Since then, in the words of Buccellato, “he went there almost uninterruptedly for more than 30 years, even after 1866, the year in which he began to have the Exercises separately at Trofarello for the new Society of St Francis de Sales. He often took along with him some young clerics from the Oratory.” One of the notable clerics, of course, was Michael Rua. These trips were mostly made on foot. Against this background, Don Bosco introduced spiritual retreats for the boys at the oratory, while he himself was sought after for giving spiritual retreats. Buccellato argues that retreat preaching is part of the Salesian charism and ministry.

The participants at SSA, who are being trained to be spiritual guides of fellow confreres and young people, are beginning to appreciate the elements of contemplation and discernment in the spiritual history of Don Bosco.

The School has since moved to Colle Don Bosco, where it will remain until the end of the programme. The 6-day individually guided retreat has begun. Next week, the participants will visit the Salesian places in Castelnuovo Don Bosco. In the two weeks that follow, they will be taken through the theory and practice of spiritual accompaniment.