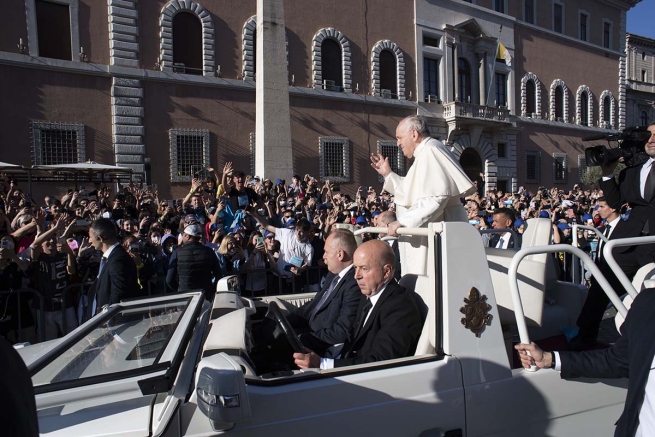 (ANS - Vatican City) - Just as after a fast one eats more to recover lost energy, so St. Peter's Square, after abstinence from crowded celebrations due to the pandemic, was filled yesterday, Easter Monday, April 18, 2022, with a flood of Italian teenagers - about 100,000, according to estimates - who came on pilgrimage to Rome from all the dioceses of the peninsula. It was Pope Francis himself, with the simple and engaging language he uses with teens, who used the metaphor of fasting at the opening of his friendly and fatherly address to the participants.

The square was packed from early afternoon with the thousands and thousands of young people participating in the pilgrimage promoted by the National Service for Youth Ministry of the Italian Bishops’ Conference (CEI) on the theme #Seguimi, i.e. Follow me.

The President of the CEI, Card. Gualtiero Bassetti, then spoke; he began the moment of prayer with a meditation, followed by some testimonies from several young people in relation to chapter 21 of John's Gospel, and in particular, the page dedicated to the miraculous catch of fish in the Sea of Galilee, after a night of fruitless attempts.

After listening attentively to all the interventions, the Holy Father took the floor. And he spoke clearly to the young, without denying the difficulties: "The clouds that obscure our time are still thick. In addition to the pandemic, Europe is experiencing a terrible war, while injustice and violence continue in many regions of the world," he began.

The Gospel passage meditated on by the young people on their pilgrimage also begins with the darkness of night. The apostles, after Jesus had already risen, returned to their normal life as fishermen and they were not without disappointments, like empty nets after a night's work. It happens even today, even to young people. And the Pope empathizes well with their situation: "What a disappointment! When we put so much energy into making our dreams come true, when we invest so much, like the apostles, and nothing turns out..."

Yet, like for the apostles, for young people too there is the possibility at dawn of an encounter with Jesus, which gives the possibility of recovering lost labors and time with abundant fruits. This is why the Pope invites us to not be afraid: of the gloom of darkness, of one's own limits, of difficulties, and rather exhorts us to open up. "To whom? To one’s father, to one’s mother, to a friend, to the person who can help you... Do not be discouraged: if you are afraid, bring it to the light and it will do you good!"

Then he offers them some examples from which to draw inspiration for success as persons and as Christians. From John, the youngest disciple, that ‘sixth sense’, the intuition typical of young people that makes them understand things in advance; and in fact, John is the first to recognize the Lord on the shore; from Peter, the courage that leads him to jump into the water to reach Jesus.

And, in moments of difficulty, the Pontiff refers to the very human gesture of returning to ask for help from one's mother, in particular Mary, the Heavenly Mother. "May Our Lady, the mother who was almost your age when she received the angel's announcement and became pregnant, may she teach you to say, 'Here I am!'" the Holy Father concluded.

The meeting concluded with the prayer for peace before the image of Our Lady Salus Popoli Romani, the Profession of Faith, and the final blessing of the Holy Father. In the end, he greeted the young with an Easter wish: "May the Risen Jesus be the strength of your lives: go in peace and be happy, all of you: in peace and with joy!"