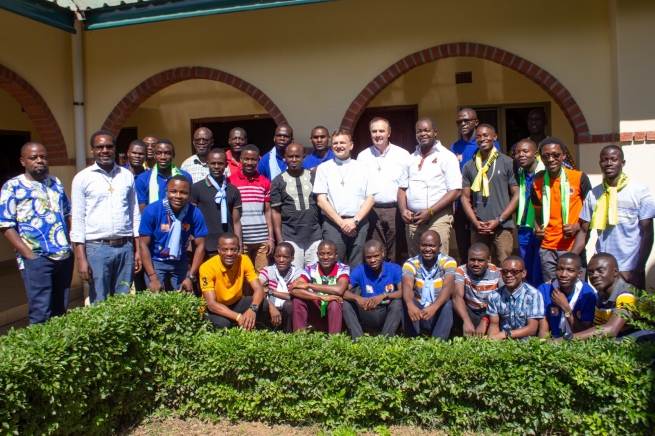 (ANS - Kabwe) - The day that the Rector Major, Fr Ángel Fernández Artime, spent yesterday, 26th April, in Kabwe, as part of his Animation Visit to the "Mary Help of Christians" Vice-Province of Zambia-Malawi-Zimbabwe-Namibia (ZMB), continued as it had begun, in fraternity, listening, fatherly animation and Salesian joy. The young people, the novices, the Salesian Bishop of Kabwe, Mons. Clement Mulenga, and the Salesian Cooperators were the privileged interlocutors with whom the 10th Successor of Don Bosco interacted.

During his morning meeting with the young people, Fr Á.F. Artime first listened to the interventions of the Coordinator and the President of the Salesian Youth Movement (SYM) of ZMB; then, he joked with them to set the right tone to the conversation; and then he spoke to the young people like a father. He reminded them of the importance of having big dreams to pursue in life, just as Don Bosco did with his dream as a 9-year-old; and thus, he allowed time for everyone to ask themselves, internally and individually, what dream they have in their hearts.

After answering some questions, and emphasizing the great value of the SYM stating that it should be present wherever there are Salesians, he said that his individual dream is to find himself among the youth of the world, to travel with their dreams, to see young people able to fulfill them and to become more generous among themselves.

Next, the Rector Major had a gathering with the novices. He first thanked the formation community for the good work they do, and then reminded them that "the greatest investment of the Congregation is the novices and pre-novices." The Rector Major also spoke to the novices about dreams, inviting them to discern them and to make them mature with responsibility. He reassured them by affirming that, God willing, they will be able to become part of a beautiful Congregation, and that to become Sons of Don Bosco one does not need special gifts, but the will to live 100% for young people, without indolence.

The Rector Major also concluded his meeting with the novices by outlining his dreams for the future of the ZMB Vice-Province: that it be a Vice-Province that listens to the needs of young people; that it be creative in giving pastoral responses to their needs; and that the novices of today, the future rectors of the works of tomorrow, fulfill their Salesian dreams.

After having been honored with a present from the young Tapiwa, on behalf of all the novices present, in the afternoon the Tenth Successor of Don Bosco had a confidential conversation with Msgr. Mulenga, during which he was also accompanied to view the construction site that will host the new cathedral of the diocese and to visit the residence and offices of the episcopate, which are already ready and are surrounded by a large space that can be used for agro-pastoral activities.

Afterwards, the Rector Major presided over the ceremony of the promise of a lady as a Salesian Cooperator and the renewal of the promise of some Salesian Cooperators. On this occasion, he thanked them for their apostolic commitment and recognized them as an important part of the Salesian Family and its mission; he also invited the others present to discern whether this could also be their vocation.

In the evening, the Rector Major watched with real interest the artistic activities carried out by the young people as part of a rich and festive cultural evening, and proudly wore, together with the Regional Councilor for Africa-Madagascar, Fr Alphonse Owoudou, and the Superior of the ZMB Vice-Province, Fr Krzysztof Rychcik, the gift given to him by the young people: a stole with the flags of the four countries that make up the Vice-Province.

Finally, at the end of the day, as part of his "Salesian goodnight" thought, Fr Á.F. Artime spoke of the "miracles" he has witnessed in his life, and particularly in the last 8 years as Rector Major. Like the one that happened to a young girl abused by her father from the age of 11 and run away from home at 14, who thanks to the Sons of Don Bosco received everything she needed to recover, make peace with her past and become, today, an eminent figure in the public life of her country.