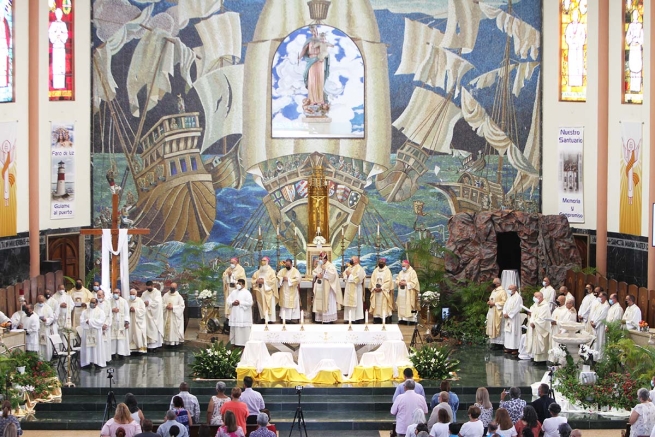 (ANS - San Juan) - With the participation of the Provincial of the "St. John Bosco" Province of the Antilles (ANT), Fr José Pastor Ramírez, the President of the Puerto Rican Episcopal Conference, Mons. Rubén González Medina, Bishop of Ponce, and many other prominent authorities and national figures, the Salesians of ANT celebrated 75 years of presence in Puerto Rico, during a solemn Mass of thanksgiving at the Shrine of Mary Help of Christians of Cantera, in San Juan.

After the end of the Second World War, in 1947, the Salesians arrived on the island of Puerto Rico, with Fr Pedro Sabane as the forerunner of the Salesian presence in the country, and choosing Calle Lutz, in the Santurce district, also in San Juan, as their first work.

Then, in 1960, the work of Cantera was founded, where the school and parish dedicated to Mary Help of Christians were located. In the same year, another 20 students of Theology and Philosophy arrived, giving a significant boost to the presence of the Salesians in Puerto Rico.

As the years went by, the number of children, teenagers, and young people benefiting from the Salesian charism continued to grow, and with it the expansion of the Salesian presence on the Caribbean island.

"This celebration is a thanksgiving to God, to Mary Help of Christians, and to Don Bosco for the assistance and accompaniment offered in the task of making the Salesian charism more and more Puerto Rican; an Easter charism, in which one can breathe joy, happiness, welcome and the gift of the other," said Fr Pastor Ramírez.

The celebration was also attended by Msgr. Eusebio Ramos Morales, Bishop of Caguas and Vice President of the Puerto Rican Episcopal Conference; Msgr. Luis Miranda Rivera, Bishop of Fajardo-Humacao; Msgr. Alberto Figueroa Morales, Auxiliary Bishop of San Juan; Msgr. Álvaro Corrada del Río, Apostolic Administrator of the Diocese of Arecibo; along with many other Salesians, members of the Salesian Family and friends of the Don Bosco work.

"This Eucharist," said the Provincial to conclude, "is an act of gratitude and recognition: to the Church and the bishops, who have welcomed us as pastors; to the laity, who have given us their friendship and their affectionate and effective support; to the Salesian Family, which in these years has remained steadfast in its mission, responding to the specific needs of each group; and to the Salesians, who have dreamed big, generating fruits of the highest quality, such as Salesian vocations and vocations for the Church. Because during these years they have contributed their best strengths, hopes, and dreams so that the Salesian charism could grow and inculturate itself in Puerto Rico."