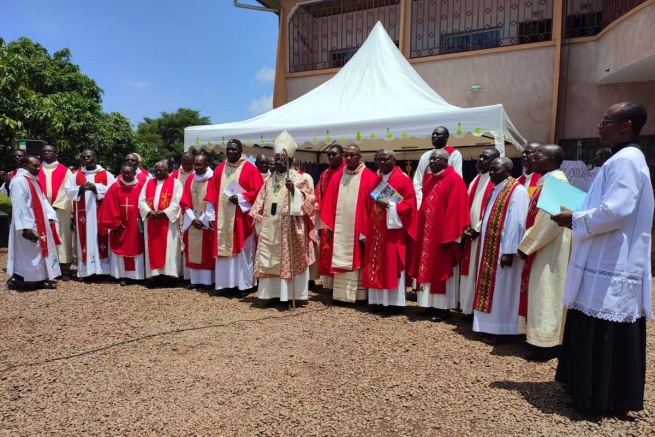 (ANS - Yaoundé) - What until the day before yesterday was the Institute of Pastoral Theology for Religious (ITPR), in Yaoundé, has now canonically and officially become the Higher Institute of Religious Sciences (ISSR).

The openness to universality in the framework of the formation of religious in Cameroon and throughout Africa is also what Msgr. Jean Mbarga, Metropolitan Archbishop of Yaoundé, emphasized during the solemn Mass of the official announcement of the ISSR’s birth, named after St. Josephine Bakhita, affiliated with the Catholic University of Central Africa/Catholic Institute of Yaoundé.

This new status of the Institute also highlights the value of the formation of the Salesian coadjutors of the Africa-Madagascar Region, whose option in favor of this center for specific formation is now a resource.

"A religious who is not well-formed, especially in the theological field, is a danger both for the Church and for the world, which is currently increasingly secularized. And a 'dormant' theology, which does not know how to take into account the present reality, is completely useless, equal to purely theoretical knowledge of no value," stated those responsible for the formation center.

The decisive option for quality formation was therefore the message emphasized during the day, and it now also becomes the great challenge to be pursued by religious in initial formation who are in preparation for their respective apostolic activities within the Church, in the Salesian Congregation, and in other realities, according to the charism of each congregation.

"Such a choice," conclude the people in charge of the formation center, "represents a commitment and a challenge for Salesian coadjutors who, according to the inheritance offered by our founder St. John Bosco, are not only hard-working educators and valid teachers of vocational formation, but above all pastors and evangelizers dedicated to the proclamation and perfect knowledge of the Good News, to better serve the Church: it is from here, in fact, that the motto of the Institute derives: 'to be informed to serve better".

Communication Office of the Provincial House of Yaoundé.