Uruguay – "One fire inspires us, one charism unites us": 2022 Pastoral-Educational Assembly 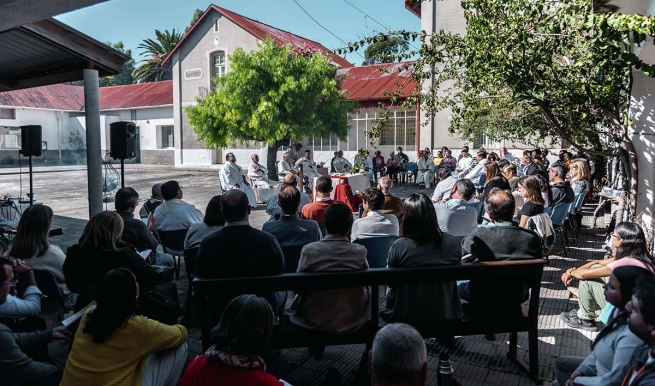 (ANS - Montevideo) - On Thursday, April 28, and Friday, April 29, more than 110 members of the animation and governance teams of the Salesian houses in Uruguay took part in the 2022 Pastoral-Educational Assembly at the "Casa Vianney" in Montevideo.

The Educational-Pastoral Assembly is a space and time for meeting, listening and discernment to grow in fidelity to Don Bosco and in the common mission, and to find together inspirations, orientations, and points of reference for the educational-pastoral life of the Salesian houses. This year, in addition to enjoying in-person meetings once again after the pandemic, they wished to generate, on this occasion, opportunities for listening, participation, and dialogue for the life of the works, based on the Salesian Pastoral Educational Project of the Province (PEPSI) for the period 2022-2027.

The assembly began in an unusual but highly appreciated fashion, with a humorous skit by actors Federico Pereira and Virginia Capobianco, of Grupo Texas. This was followed by a period of individual reflection so that participants could recall how they first came into contact with the "original fire" of the Salesian charism, and then reflect on how they are still keeping it alive today. At the end of this phase there followed a sharing of experiences in groups.

The first day's program then continued with Mass presided over by the Provincial of Uruguay, Fr Alfonso Bauer, who invited the participants to continue their commitment "so that many may experience God's love in their lives." "Today," he underscored, "we are the ones who make the life and charism of Don Bosco present in our homes."

As a symbolic gesture, during the Eucharist, a representative from each community placed a piece of wood in a large bonfire, a symbol of everyone's desire to keep the fire of the Salesian charism alive.

In the afternoon, the PEPSI was handed out, preceded by a game that allowed each of those present to receive the document with their name on it, presented in a beautiful cardboard box. Subsequently, through an articulated dynamic, the central aspects of the four guidelines indicated by the PEPSI were presented: a document, which systematically expresses the conceptual aspects of the project; a map, which graphically expresses the global and symbolic vision; a narrative, which expresses mysticism in metaphorical form; an operational model, which expresses the guidelines for its fulfillment.

The morning of the second day was devoted to discernment work on the themes of animation and governance. Participants were invited to describe the state of their respective local animation activities, focusing on identifying what cannot be lacking in their narrative, how decisions are made and how they are put into practice, and then they were encouraged to listen to and exchange opinions on other experiences.

In the last minutes of the Assembly, each pastoral educational community received a glass container containing a candle and was invited to write on the same transparent container a wish for another Salesian house. Thus, in the end, these "good wishes" were illuminated by the candles lit by the fire of a candle placed in the center of the room and were exchanged among the various communities.

The Assembly ended with the words of thanks and a farewell by the Provincial, who invited everyone to "rekindle and not let the flame of the charism be extinguished", and with the sharing of the fraternal agape.