Vatican – Pope to Superiors General of UISG: "I count on you in this synodal process" 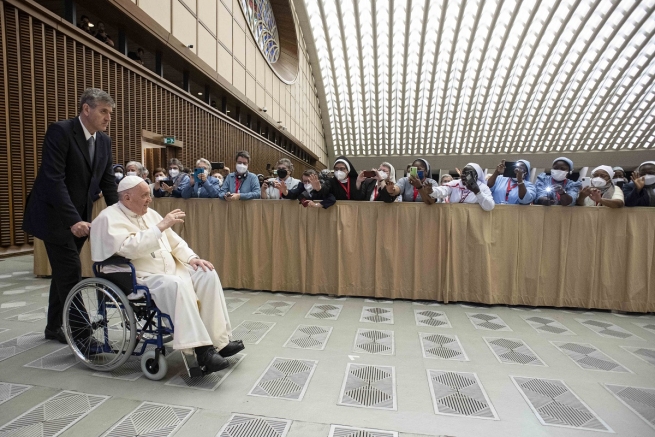 (ANS - Vatican City) - Acknowledge and welcome one's own vulnerability in order to know how to bow to those of others. This is the message that Pope Francis left yesterday, May 5, to the Superiors General gathered in Rome for the XII Plenary Assembly of the UISG (International Union of Superiors General): a message he was not afraid to exemplify in the first person, arriving at the meeting in a wheelchair, due to persistent knee pain.

But the frailties the Pope spoke of are not only physical or individual ones. "Religious life recognizes its vulnerability today, although it sometimes accepts it with difficulty. We had become accustomed to being meaningful by our numbers and by our works; to be relevant and socially considered... The crisis we are going through has made us feel our fragilities and invites us to assume our minority. All this invites us to recover the attitude that the Son of God has towards the Father and towards humanity, that of 'becoming a servant'".

The Pontiff, in the message prepared for the occasion and then delivered to the religious - after having taken advantage of the audience to answer their questions - used two Gospel figures as an example.

The first is that of Peter, who at the Last Supper had to accept that Jesus served him in the Washing of the Feet.  "Like Peter and with Peter, we are now called, after recognizing ourselves as vulnerable, to ask ourselves what are the new vulnerabilities to which we, as consecrated persons, must lower ourselves today. In light of the signs of the times, what ministries is the Spirit asking of us? What changes does the Spirit require of us in the way we live the service of authority?" the Pontiff asked.

The second figure is that of Magdalene, the woman who passed from a disordered and fragile life to a life centered on Jesus. This transformation, emphasized by the evangelists, is for the Pope a sign of the Lord's power and testimony that everyone can be called to put their frailties at the service of the proclamation.

The motto of the XII UIS assembly is: “Traveling towards the Synodal Path: starting from our vulnerability”. For this reason, after speaking of frailties, the Holy Father also focused his gaze on the theme of synodality. "If the synod is above all an important moment of listening and discernment, the most important contribution you can make is to participate in reflection and discernment by listening to the Spirit and lowering yourselves, like Jesus, to go out and meet your brother in his needs," added the Pontiff.

The invitation to live the synodal journey is multifaceted by the Pope in all its dimensions and respect of the many charisms: in the parishes, in the dioceses ... But first of all in the communities and institutes.

"I count on you, dear sisters, to accompany the holy people of God in this synodal process, as experts in building communion, in encouraging listening and discernment," concluded the Pope, before delivering a final invitation to the religious to care for fraternity and to always maintain trust in God, even in the face of the many challenges that religious life faces in this age.

The XII UISG Assembly, which opened on Tuesday, May 2, closes today, Friday, May 6, having gathered more than 700 Superiors General from over 70 different countries. The week of work was articulated with presentations given by 10 speakers on five key themes: Vulnerability, Synodal Process, Religious Life and Synodality, and Peripheries, Transformation.

Canonically founded in 1965, inspired by the Second Vatican Council, the UISG promotes collaboration among women's congregations of Apostolic Religious Life. Currently, it is composed of 1856 Superiors General organized within 36 regional constellations.

The materials of the XII Plenary Assembly are available here.