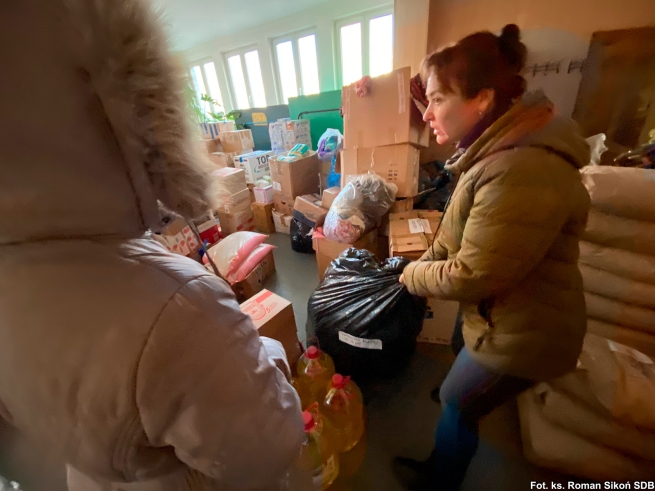 (ANS - Rome) - The campaign of humanitarian support due to the emergency in Ukraine continues its silent but daily efforts to meet the most basic needs of those families who, because of the war, seek refuge and accompaniment outside Ukraine. Attention to the real needs of others, generosity, and creativity are the hallmarks of a commitment that continues unabated and without borders.

From Italy come testimonies about two significant welcoming experiences: the first comes directly from the Salesian Motherhouse: "Currently in Valdocco, in Turin, we are hosting 16 Ukrainian boys who are part of a rowing team," says Fr Alberto Goia, Youth Ministry Delegate for the Salesians of Piedmont, Valle d'Aosta, and Lithuania. "They range from 12 to 17 years old and, together with their coach, they arrived right after Easter. When we welcomed them they were bewildered, yet they immediately showed a desire for normality."

Normality that also passes through the possibility of practicing the sport that united them and that punctuated their pre-war lives: "They themselves could not get over the fact that they were able to see their friends again, to be together and be able to train again. In fact, thanks to the association Gli amici del fiume (The Friends of the River), they have resumed sports activities, which means so much to these boys," Fr Goia continues.

But that's not all: because for the sense of normalcy few things are as strong as culinary habits. "There are some Ukrainian women living in Turin who have made themselves available to cook their typical dishes, which is important for the boys because it is not easy to adapt immediately to different flavors. Rediscovering familiar food is a way to feel welcome while still maintaining a connection to their homeland. It is necessary to take into account that these minors have left not only their homes but also their parents, with fathers being called to fight."

The second experience is underway at the Salesian "Don Bosco" oratory of the "St. Francis of Assisi" parish in Terni, where an ad hoc Italian language course has been created to offer the possibility for Ukrainians in the city to communicate without the need for a language mediator. Not only are professors teaching but also and especially high school students, who immediately responded to the appeal of the parish priests. The project, carried out in cooperation with the social services of the City of Terni, was the initiative of the Salesians.

"The objective of this course is not only to teach them Italian but also to make new friends," explains Alessandro, a student and now also a ‘professor’.  Walks have also been organized for the young refugees, so they can discover the city where they now live; while the younger ones, once the Italian lesson is over, move to the little playing field of the oratory and initiate shared play with other children and young people.

In Spain, instead, the solidarity campaign launched by the Spain-Mary Help of Christians (SMX) Province and the NGO "Bosco Global," aimed at supporting some 30 refugees in the Polish cities of Gdansk, Lubrza, and Szczecin, continues and will now also have two new reception points in Spain, in La Almunia and Burriana.

"We continue to raise funds. All donations that will come to the accounts of the Province and 'Bosco Global' will be destined for specific projects to assist people who are victims of the war in Ukraine," explains Fr José Luis Navarro, Coordinator of Provincial Mission Animation and the Campaign for the Ukrainian Emergency. "We will manage the projects proposed by the Coordination Center in Warsaw and we will also take care, depending on the needs and the amounts collected, of the direct assistance projects that are being established in the Salesian houses of our Province."

Finally, another initiative worth highlighting comes from Malta and concerns the journalistic and humanitarian venture of reporters Neil Camilleri and Giuseppe Attard of the newspaper Malta Independent. The two traveled to Ukraine between March 28 and April 7, visiting cities such as Lviv and Kyiv, and witnessed the tragedy of war and its scars in locations such as Irpin or Bucha. During their stay, they also interviewed many refugees housed in Salesian homes in Ukraine, Poland, and Slovakia, which is why they are now producing a documentary about their recent experience in Ukraine, to raise funds for refugees living under the care of the Salesians of Don Bosco. That documentary will be available exclusively on GO TV starting May 23.