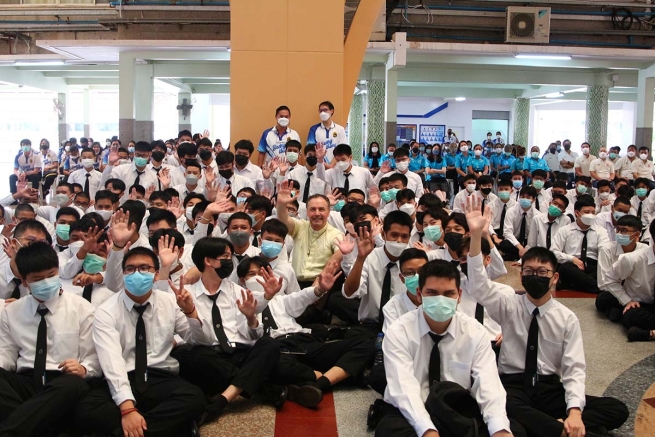 (ANS – Hatyai) – Today, 18 May 2022, Fr. Ángel Fernández Artime, the Rector Major, concluded his animation visit to the Salesian mission in Thailand. In fact, in the early hours of tomorrow morning, 19 May, he is scheduled to fly back to Italy, nearly after 15 days spent in the country, first preaching the retreat to the Councils of the Provinces, Visitations and Delegations of the East Asia - Oceania Region, and then animating the presences of the Salesian Family throughout Thailand.

At first, he visited Saeng Thong Vitthaya School, run by the Salesians, and Thidanukhro School – Hatyai, run by the FMA Sisters, two schools that carry forward many educational activities together in academics and pastoral ministry, with the Church of Our Lady of Lourdes as the center. The religious members of the two schools, together with the parish priest, gave a warm welcome to the Rector Major, in an atmosphere of festal decorations in the school premises, with the cultural performances of the students.

The tenth successor of Don Bosco on his side encouraged the teachers to exercise their duties towards the students with love. In his message he affirmed that to be a teacher was a beautiful vocation because one could enter into the depth of the hearts of the students in order to form them to be a good person. He also advised the student, to also obey their teachers, be always grateful to them as they worked for their good and look forward for their growth every day. At the end, the Rector Major also extended his gratitude and appreciation to the Alumni Association and the Parent-Teacher Association that cooperated with the Salesians to encourage their children and grandchildren to obtain a quality education. These Associations had played an active role in cooperating with the school's activities and projects: they created projects to help alleviate the needs of the society, like helping out those affected by the Covid-19 pandemic. They distributed food packs together with the school to those victims of the natural disasters.

Then, the Rector Major proceeded to Pattani, where he met the Salesian confreres and the Sisters Servants of the Immaculate Heart of Mary (SIHM, 14th group of the Salesian Family) working in the three border provinces of Southern Thailand (Yala, Pattani and Narathiwat) - areas where the population is overwhelmingly Muslim and which had experienced strong separatist tensions, with thousands killed and injured, between 2004 and 2011, although the situation had now improved.

Speaking to the religious gathered in that zone, the Rector Major emphasized that being present in a tense situation, was a sign of witnessing to the presence of God. He expressed convincingly, “Your presence will help and encourage our catholic faithful in their daily life. Through you they will come to understand that God loves them and does not forget them”.

Thus concluded the animation visit of the Rector Major in Thailand, a moment of grace coupled with so many blessings for the Salesians and the Salesian Family of the country. “We are grateful to the Rector Major for his sacrifice and love for us. May God help us to be faithful to the charism of our Congregation, so that we may continue to be signs and bearers of God’s love for the young, especially the poor and abandoned”, echoed the Salesians of Thailand.