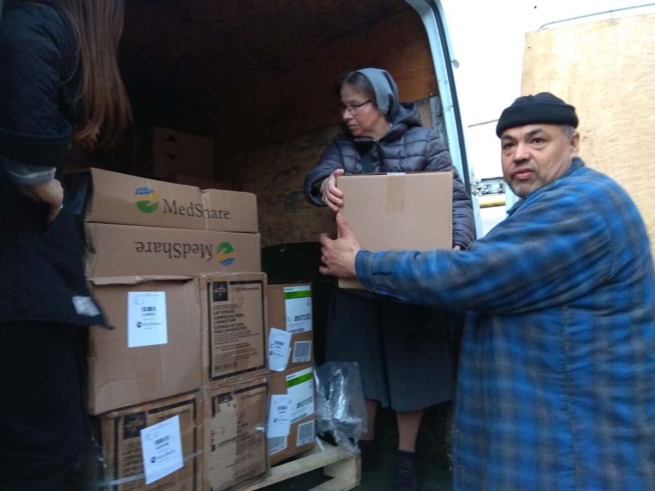 (ANS – Kiev) – A hospital in Ukraine has medical supplies thanks to a new partnership between “MedShare” and Salesian Missions, the U.S. development arm of the Salesians of Don Bosco. “MedShare” is a humanitarian aid organization dedicated to improving the quality of life of people, communities, and the planet by sourcing and directly delivering surplus medical supplies and equipment to communities in need around the world.

The shipment, which left the U.S. in March, is now in the hands of Salesian Sisters. The supplies are being distributed to ambulances and clinics and used to treat those who have been internally displaced within the country and arrive daily seeking medical attention.

“We appreciate MedShare’s donation which has assured Salesians on the ground in Ukraine have access to the medical supplies they need to care for the sick and injured,” said Father Gus Baek, director of Salesian Missions. “Salesian organizations around the globe have come together to help support Salesians in Ukraine who are working with people displaced inside the country and refugees who have fled to bordering countries. The need is overwhelming and we are all doing our part.”

Salesian Missions has already launched a Ukraine Emergency Relief Fund that will help provide shelter, nutrition and supplies to refugees in need. This fund is among other fundraising efforts that Salesians in more than 130 countries are doing in support of Salesians on the front lines of this crisis.

In addition to financial support, Salesians are sending material support similar to the medical supplies from MedShare. Through the support of a U.S.-based foundation, two ambulances were purchased in Serbia, filled with medicines and then driven by two Serbian drivers into Ukraine. Even though the trip was filled with challenges, the two ambulances made it to their destination inside Ukraine.

Salesian missionaries around the globe are answering the call to help support people in distress in Ukraine and refugees fleeing the conflict. Salesians living and working in Ukraine have remained in their centers and churches, and they are helping families with shelter and nutrition.