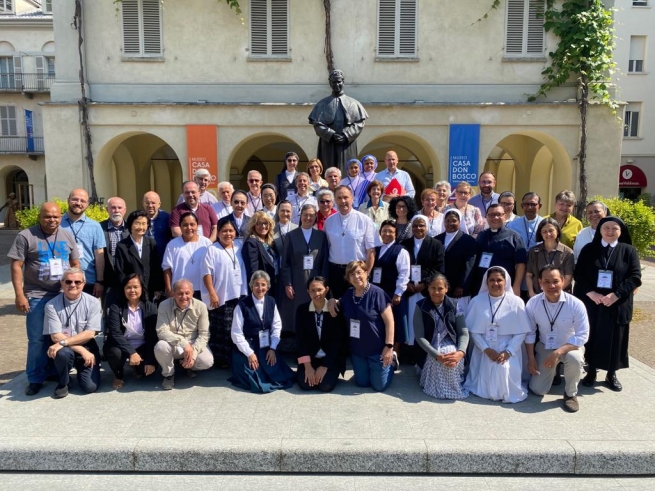 (ANS - Turin) - The 2022 edition of the World Council of the Salesian Family (Turin-Valdocco, May 20-22) was the most attended ever: 25 World Leaders of the various groups physically present, not counting that those who were unable to attend had a parallel program to live the experience even at a distance. The gathering was therefore a moment of high-level confrontation among those who identify Don Bosco at the roots of their charism; and, in this year that marks the 400th anniversary of St. Francis de Sales’ death, it allowed us to go back even further into the sources of Salesian spirituality, to the holy bishop of Geneva and his insights on goodness and visitation.

-  the elements of the spirituality of Saint Francis de Sales that characterize the Constitutions/Statutes of each respective Group;

-  the practice of 'ascertaining goodness' and 'visitation' in educational-pastoral action in response to new poverty and emergencies.

From the first reflection, developed on Friday 20, an internal reflection emerged within each group that led to examining the bonds between the various founders, Don Bosco and St. Francis de Sales. The charismatic fruitfulness of such bonds, far from being fully elaborated in the span of a weekend, motivated all present not to stop the search, but on the contrary to continue to deepen it in the months and years to come, confident that they can still find many treasures to be appreciated, discussed and developed.

"The goodness, cheerfulness, humility, and meekness that characterize the spirituality of Saint Francis de Sales I could really experience in the different moments lived, in the attitudes of each participant, and in the communion among us," commented Sister Maria Letizia, of the Sisters of Charity of Jesus, on the occasion.

The second point, in addition to recalling the typically Salesian and Don-Boschian trait of loving-kindness, sparked in the participants a renewed zeal for what has been called the "spirituality of visitation." In the face of current emergencies and in response to new poverty, the groups of the Salesian Family have chosen to look to Mary, and like her, commit themselves even more than before to visiting families, communities, the poor, the needy... To live a spirituality made up of presence and sharing, of accompaniment and proximity, capable of bringing the light and life-giving touch of God to those in greatest need.

"It was a meeting of the highest level, and I had the opportunity to appreciate every intervention," added Fr Joe D'Souza, SDB, Superior General of the Disciples. "It allowed us to deepen Salesianity by looking at St. Francis de Sales through, especially, his loving-kindness and his method of Visitation to bring souls to God. This is the Salesian spirit that Don Bosco drew from Saint Francis and that he passed to us through the Preventive System."

"It was a truly wonderful experience to get to know and experience the richness of the Salesian Family and the Salesian spirit. It was good not only to meet people from many parts of the world but especially to experience the unique Salesian charism in its different forms. I intend to participate again in the future," concluded Bryan Magro, World President of the Confederation of Past Pupils.

In the homily of the meeting’s concluding Mass, celebrated in the Salesian cradle of the Basilica of Mary Help of Christians, the Rector Major centered his reflection on the figure of the Holy Spirit, the authentic protagonist of the life of the Church and of all its manifestations. It is only through his intervention that one can explain the journey that began under a humble canopy in Valdocco and then multiplied and diversified throughout the world: "Thanks to the action of the Holy Spirit today this Religious Family is spread in so many places, seeking to do good, in the name of the Lord Jesus," the Rector Major said.

He then ended by reminding all those present of the importance of leaving room for the Holy Spirit even in every occasion of discernment, because it will always be the Spirit who will make those realities that are not simply human, but that come from God, endure in time.

The World Council of the Salesian Family is an annual meeting that gathers the leaders of the 32 groups that are part of this religious family, representing over 400 thousand people - priests, consecrated men and women, and lay people - actively involved in the service of the Church.