Guatemala – Chiachal, an indigenous Qeqchi community reborn after the deluge 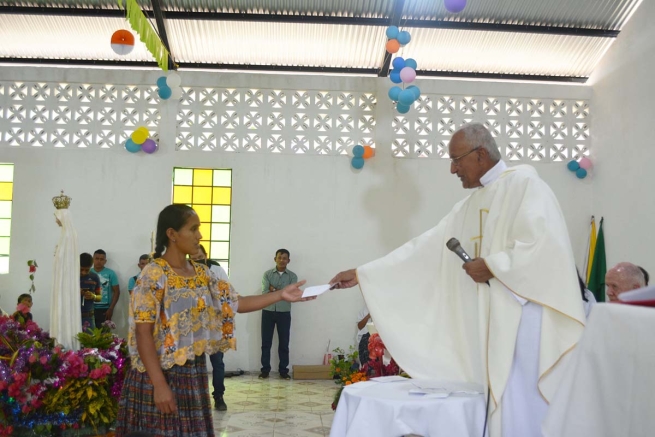 The community of Chiachal, 65 km north of the city of San Pedro Carchá, inhabited by 105 indigenous families of the Qeqchí ethnic group, was among those especially affected and damaged. Located in a deep depression, it was soon invaded and flooded by water, which covered houses and crops, causing enormous damage.

The Salesians of San Pedro Carchá immediately went into action. In coordination with the Provincial House in the capital city and with financial support from Salesian houses in Central America, benefactors, and other charitable organizations, they activated a housing reconstruction project. The first step was the purchase of municipal land for the construction of new housing and the church; the work then proceeded expeditiously in synergy between Salesians, "Don Bosco" Center, and "Talita Kumi" Center.

The religious community of the Sisters of the Resurrection, for its part, purchased land that has since been subdivided into 120 lots, where 105 new houses, three churches, a school, a health center, and a community hall have been built. Also, each family was granted a family farm and their respective farm animals, and a cardamom processing cooperative project, including a dryer, is also underway.

The project benefited all families, regardless of religion, and supported both the 45 Catholic and 67 evangelical families in the Chiachal community.

On Friday, May 13, the handover of the keys to the new houses was celebrated during a solemn Eucharistic celebration in the new Catholic church, which was inaugurated the same day.

"Talita Kumi" will continue to support this project with various initiatives, religious and otherwise.