RMG – Mary Help of Christians, "Our Lady of Don Bosco" 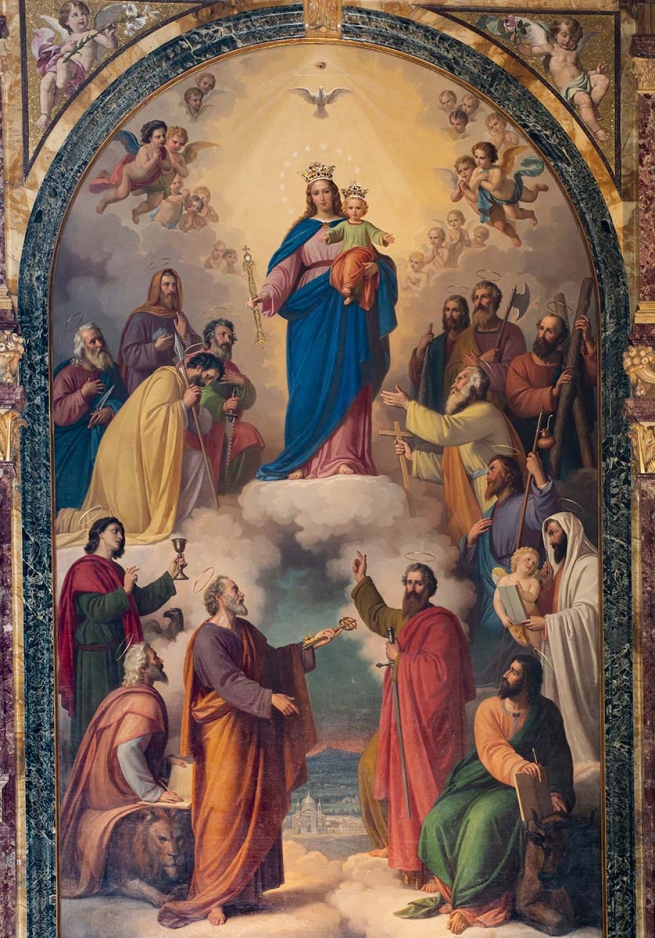 (ANS - Rome) - "Auxilium Christianorum," "Help of Christians," is a title proper to the Litany of Loreto of the Holy Rosary and is a patrimony of the universal Church. At the same time, this title has a very special value for the Salesian Family, given the great devotion that Don Bosco manifested toward Mary invoked under this very title.

The invocation "Auxilium christianorum, ora pro nobis" appears, for the first time, in the version of the Litany of Loreto (Litaniae lauretanae) published in 1576 and approved by Pope Clement VIII in 1601. This invocation was added by Pope Pius V after the Holy League's victory over the Ottomans at Lepanto on October 7, 1571. For this glorious and final victory, the Pope instituted the feast of the Holy Rosary, but the grateful invocation to the heavenly Protectress as "Auxilium Christianorum" is not to be attributed directly to the Pope, as was later said, but to the victorious veterans who, returning from the battle, marched through Loreto to thank Our Lady; the banner of the fleet, instead, was sent to the church dedicated to Mary in Gaeta, where it is still preserved.

The cry of joy of the Christian people was perpetuated in this invocation; the Venetian Senate had it written under the large commemorative painting of the Battle of Lepanto in the Doge's Palace, "Neither power, nor arms, nor leaders have led us to victory, but Mary of the Rosary," and so alongside the ancient titles of "Comforter of the afflicted" and "Refuge of sinners," "Help of Christians" was added for the people and the Church.

The feast day of Mary, Help of Christians, was established by Pope Pius VII on Sept. 15, 1815, and set for May 24 in memory of his triumphant return to Rome (May 24, 1814) after his imprisonment under Napoleon at Fontainebleau. Originally the feast was limited to the Church of Rome, but it was soon adopted by the Tuscan dioceses (1816) and then extended to the universal Church

The cult, while continuing in the following centuries, had its ups and downs, until in the 19th century it was revived by Don Bosco. From the very beginning, the great educator and innovator from Turin placed his work as priest and founder under the protection and help of Mary Help of Christians, to whom he turned for every need, especially when matters were dragging on, becoming complicated, entangled. The great priest, an apostle of youth, however managed to erect the basilica of Mary Help of Christians in the Salesian citadel of Valdocco – Turin in just three years, in 1868; under Her maternal protection, he placed all his work, by now spread throughout the world. And by now "Mary Help of Christians" has become "Our Lady of Don Bosco," inseparable from the great Salesian Family, which has given the Church a host of saints, blessed, venerable, and servants of God; all children who have entrusted themselves to the help of the sweetest and most powerful of mothers.

Entire Continents and Nations have Mary Help of Christians as their Patroness: Catholic Australia since 1844, China since 1924, Argentina since 1949, Poland since the early decades of the 1800s, widespread and ancient is the devotion in Eastern European countries.

In the beautiful Turin basilica dedicated to Her, there is the majestic painting, commissioned by the founder himself, representing Mary Help of Christians, with the Child in her arms and surrounded by the Apostles and Evangelists. The meaning of the entire painting is very clear; just as Mary was present with the apostles in Jerusalem at the beginning of the Church's activity, so still She stands to protect and guide the Church through the centuries.