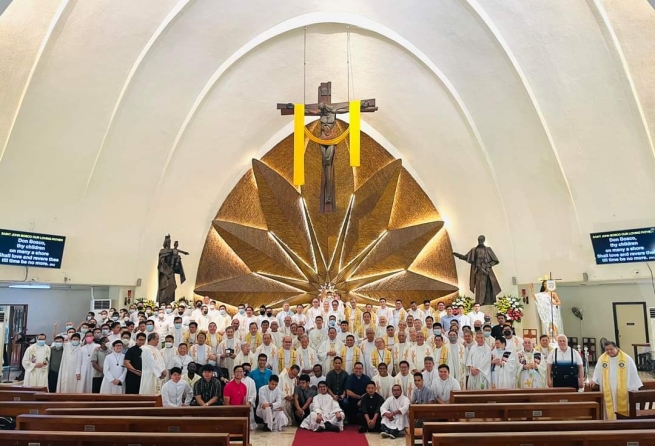 (ANS – Makati City) – After almost two years of being unable to gather together due to the restrictions imposed by the CoViD-19 pandemic, the Salesians of Don Bosco of the Philippines-North Province (FIN) convened at the St. John Bosco Parish for the conclusion of the Extraordinary Visitation by Fr. Alfred Maravilla SDB, the General Councillor for the Missions, who came in the name of the Rector Major. The EAO Regional Councillor, Fr. Joseph Phuoc SDB, also graced the event.

Fr. Alfred presided over the Holy Mass at 9:00 AM, while Fr. Gerardo “Gerry” Martin, the Provincial Superior of the FIN Province delivered the homily. In his homily, Fr. Gerry reiterated that “if we come to serve the Lord, we must prepare for life’s trials, challenges, and problems, [for] preparation does not eliminate problems, but it makes us ready to face them, and helps us to find a way out of [them].” Furthermore, he said that “the best way of preparing for difficulties…is to cling to God, trust in God, hope in God, and make straight our ways. In other words: fidelity to God, fidelity to our Salesian consecration, and charism.”

After the morning refreshments, the Salesians gathered at the Joy Center of Don Bosco Technical Institute Makati for the program and concluding conference.

Fr. Alfred noted some positive observations about the state of the Province in general. He said that the works that the Salesians are doing really do cater to the poor youth of society. He made special mention of the Pugad Migrant Youth Ministry in SJB Parish Makati, the Tuloy sa Don Bosco Street Children Village in Alabang, and the relevant and significant presences in the rural areas, particularly in Don Bosco Calauan, Don Bosco San Jose, Don Bosco Naga, and Don Bosco Legazpi. As a matter of fact, he gave the imperative that these were the works that the Province needs to focus on and develop at a faster rate.

Fr. Alfred also noted some proposals in the realms of formation and the vocations ministry. Along with the proposal of General Chapter 28 that asks, “Salesians: What kind of Salesians for the young of today?” he strongly proposes to everyone to be more committed to living up to the challenges of consecrated life.

In the end, Fr. Alfred Maravilla says that the works here in the Province are of great promise. All these take place for greater meaning. It is interesting to note, too, that even the youngest Salesians like me were present as if to say that there is so much to learn from here. Moving on would always require bringing those lessons along so as not to repeat the same mistakes.

This is what Fr. Alfred calls the “Kairos” of our Province. The Lord is passing by, and we must catch Him! This opportunity does not come often, and so it is only right and proper to seize it at its dawning for the hope of renewal and greater fidelity.