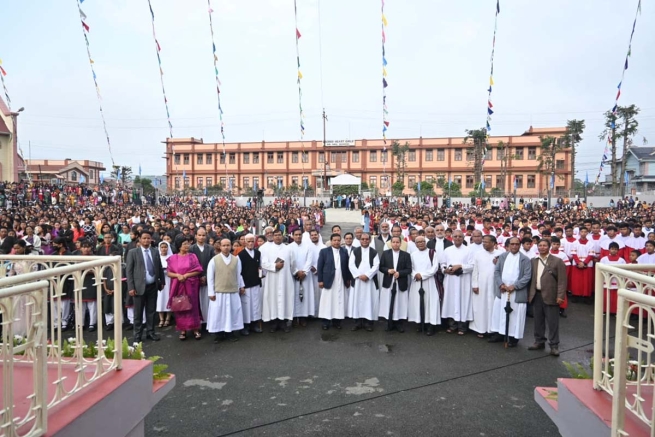 (ANS – Mawlai) – On 22nd May, Mawlai Parish under the leadership of its Pastor and in collaboration with the Salesian Provincial, celebrated in commemoration the 100th Marian Procession in the city. Celebrated by the Provincial Father Paul O. Lyngkot and concelebrated by 24 other priests in the presence of thousands of faithful the First Marian Procession that took place on 24th May 1922 was commemorated today.

The 100th Marian Procession begun with the Holy Eucharist presided by the Provincial. The Parish Priest Father Telesphorus solemnly welcomed the celebrants and the faithful who among them were some government officials and other dignitaries. In his homily the Provincial spoke about the role played by Mary in the history of redemption and he urged the faithful to ‘listen to Jesus’. Secondly, he spoke about finding true peace in Jesus Christ.

The Procession begun at 1:30pm in which that same statue of Mary Help of Christians that was taken for the first Procession in 1922 by the first group of the Salesians was taken for Procession in Mawlai town. Rosary prayers, hymns to the Virgin Mary and other intercessory prayers were recited and sung during the two hours Marian Procession. After which Father Roland Kharkrang sdb one of the older Salesian narrated about the first procession that took place 100 years ago in Laitumkhrah. ‘The first group of Salesians under the leadership of Father Louis Matthias after they have obtained permission from the DC at that time, took to street of Laitumkhrah for the first time the statue of Mary Help of Christians for a procession with the participation of around 600 faithful, although many people came out of their houses to see what is that procession all about. The Procession took place at 6pm and many of the faithful carried lamps for the procession’ he narrated. He also told the gathering that after the Procession, the 11 Salesian missionaries knelt in front of the statue of Mary Help of Christians and consecrated the whole of North East India with all its land and people to the maternal protection and intervention of Mary Help of Christians. He also stated that on two occasions; one during the Japanese invasion in 1942 and the Chinese encroachment of NE in 1962 were spared by the miraculous intervention of Mary Help of Christians. He ended his speech by narrated a conversation between two elderly women in Sohra in which they Catholic woman told the other non-Catholic for the need to accept Mother Mary as our Mother.

The Procession was concluded with the Eucharistic Adoration animated by Father Richard Majaw the Vicar General of the Shillong Archdiocese.