Italy – An entire people under the mantle of the Mother: Feast of Mary Help of Christians in Turin 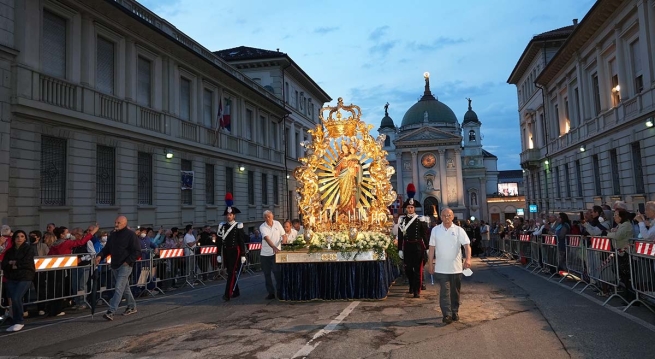 (ANS - Turin) - The Feast Day of Mary Help of Christians in Turin has finally returned to being what it always was: a celebration of the people, even before being a Salesian feast. Yesterday, May 24, the city of Don Bosco once again gathered safely under the mantle of the Help of Christians, to celebrate and honor her. "Mary always precedes us in faith and in the trusting and generous response to God in our lives, and she is a solid support for our faith," said the Rector Major, Fr Ángel Fernández Artime, in the homily of the Mass he presided over in the afternoon in the Salesian basilica of Valdocco.

"This year we are here, we want to walk behind Mary", began Fr Moreno Filipetto, Provincial Delegate for Social Communication of the Special Circumscription of Piedmont and Valle d'Aosta, in inaugurating the "digital marathon" which from 5 pm onwards accompanied the faithful connected from all over the world to experience this moment of celebration long-awaited by the whole Salesian Family.

This was followed by a series of testimonies of love for "Our Lady of Don Bosco" by Fr Michele Viviano, Rector of the Basilica, who recounted the great expectation of the community and the people's desire to participate, already manifested in the days preceding the feast; by Fr Bruno Ferrero, Director of the Italian Salesian Bulletin, who with his well-known sensitivity sketched Don Bosco's filial devotion to Our Lady and his commitment to the construction of the Basilica; by Fr Pierluigi Cameroni, Postulator General of the Salesian Family, who recalled the global dimension of the affection towards Mary Help of Christians and the experience of entrustment to Mary of the next saint, Artemide Zatti; and by many other people from all over the world, Salesians from the various countries, as well as the volunteers from Valdocco who made the festivities possible.

It was a collection of stories, tales, insights, and inspiring prompts that led the way to the most solemn moment, the Rector Major's Eucharist. In a Basilica filled as not seen in years, with so many young people and members of the Salesian Family and with the significant presence of about 50 Ukrainian refugees (mothers, children, and 15 teenagers) who have been at Valdocco this past month, the 10th Successor of Don Bosco, first of all, brought the Holy Father's greetings, sent in a message: "I will be spiritually united with you on May 24 in the Basilica of Mary Help of Christians praying for the Church, for families, for the elderly and young people. And please, I ask you to pray for me."

Subsequently, the Rector Major offered a reflection starting from the Gospel of the Feast, the Wedding at Cana. The Rector Major, observing how Mary invites Jesus to work for the married couple left without wine, observes that, again, as in the mystery of the Incarnation, "Mary is the one who introduces the Savior". Both produce beneficial effects in the life of anyone who lets them act in their human affairs. "Jesus and Mary, with a different intensity, make God present wherever they are, and where there is God there is love, grace, and miracles," said the 10th Successor of Don Bosco.

Who then also noted how Mary, a believing woman and Jesus' first disciple, at Cana "shows the courage of her faith, because, until that moment, Jesus had not performed any miracle, neither in Nazareth nor in his public life."

Finally, Fr Á.F. Artime emphasized Mary's availability to God: that same availability which, made evident at Cana, had already been expressed at the Annunciation and will find its culmination in her acceptance of God's Plan of Salvation under the Cross of Jesus.

This is why the Rector Major concluded by inviting everyone to follow Mary's dictation to the servants at Cana: "'Do whatever he tells you.' These are her last words recorded in the Gospels: they are the legacy she hands over to all of us."

Then, in the evening, the solemn procession through the streets of Turin finally took place. As per tradition, the banners of the various groups, schools, associations, and movements paraded along the route, serving as the vanguard of the long procession, led by the Archbishop Emeritus of Turin, Msgr. Cesare Nosiglia, and composed of hundreds of nuns, religious and priests, and thousands of lay faithful: a whole people who decided to follow Mary and pay homage to her with songs, prayers, and hymns.

At the end of the procession, Msgr. Nosiglia delivered a typically Salesian message to all those present, both those inside the Basilica and the large crowd that remained on the square in front of the church: "May Mary give us the help that so many families, workers, the sick, and those suffering from growing poverty, so many young people in particular and so many refugees from the war in Ukraine need." And again to the young people, recalling Don Bosco and Pope Francis: "Dear Young People, do not let yourselves be robbed of hope... Have the courage to dare, aiming at the heights of responsibility and a greater love, the one Christ offers you, without fear, because that is what the Lord calls and equips you for."

For all those interested, you can watch and savor the festival's central moments - interviews with guests and prominent figures, the Mass presided over by the Rector Major, and the procession of Mary Help of Christians - on the ANS Facebook page.