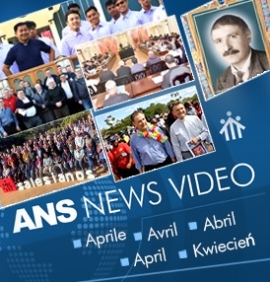 (ANS - Rome) - The fourth video of the Salesian iNfo Agency's new feature "ANS News Video" has already been online for a few days on the ANS YouTube channel. This edition, dedicated to the most important activities and events carried out within the Congregation and the Salesian Family last April, is full of various important and interesting news.

For starters, the announcement of the canonization of Blessed Salesian Artemide Zatti, "the Salesian Good Samaritan", as defined by the Rector Major, Fr Ángel Fernández Artime; then the Animation Visit made by the latter in Zimbabwe and Zambia; it then continues with an overview of the numerous Provincial Chapters carried out during this period in all the Salesian Regions, to give fulfillment and perspective to the orientations offered by the Congregation’s General Chapter 28; and ends with a collage of the many initiatives that bring great joy and hope for the Salesian mission throughout the world.

A special thought is set aside for Ukraine, to recall the effort of the Sons of Don Bosco to continue to be close to the war-stricken population in so many ways and in so many realities.

"ANS News Video" is a new ANS feature that reviews and spotlights the most important Salesian events of each month, offering the main Salesian news not only to "readers" but "viewers" in a broader sense. Conceived starting last year, the project went online at the end of February 2022 with the first edition of "ANS News Video," dedicated to January.

April's "ANS News Video" can be viewed in Italian, English, Spanish, French, and Portuguese on ANSChannel's respective language channels, and can also be accessed directly from the website's homepage. The release of the video in Polish is also expected in the coming days.