Spain – "Life in a Suitcase": 56 images to reflect on condition of people displaced by Ukraine war 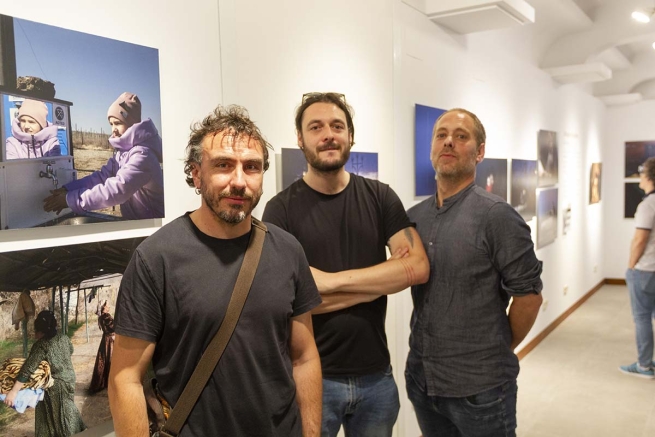 (ANS - Madrid) - Last Thursday, May 19, the Museum of "Misiones Salesianas," the Salesian Mission Office in Madrid, inaugurated the collective photographic exhibition "La vida en una maleta: historias de un conflicto armado" (Life in a Suitcase: Stories of an Armed Conflict). It reflects on the consequences of the war in Ukraine for the population displaced within and outside its borders. More than 70 people attended the opening and tour led by three of its photographers, Olmo Calvo, Edu León, and Bruno Thevenin.

Women with children fleeing their homes; families and couples separated not knowing when they will meet again; crowded train stations and borders of solidarity emerging as shelters of hope... When talking about war, it is essential to talk about the emotions that come and go, about love, hatred, despair, and peace.

The 56 images that make up the photo exhibition address the largest humanitarian crisis in Europe since World War II and offer different perspectives on a conflict that is not yet over. For one of the artists, Bruno Thevenin, it is important to know how far it is useful for a photojournalist to continue documenting in the field and whether and how one contributes. "There has been a media boom, with an oversaturation of images that need to rest," the photojournalist explained.

"No one asks why a child should find himself in the middle of a war. War tells us about life," Edu León, curator of the exhibition, underscored in his speech. It also became clear during the guided tour how martial law in Ukraine imposes harsh restrictions and limits Ukrainians' freedom of movement.

There are then different realities around refugees. Olmo Calvo pointed out that there are photos of people who were already refugees in Ukraine: "They reported that they had problems getting out. The border crossing involved differences and the flow was much slower," the photojournalist pointed out.

The Salesian response to the emergency also finds space in the group exhibition. Since February 24, 2022, the Salesian Family has offered all kinds of assistance in the more than 200 works scattered between Ukraine and the border countries. The words of thanks of Fr Luis Manuel Moral, Head of "Misiones Salesianas," referred to the figure of Don Bosco and how his life "pulsated compassion and mercy." Therefore, in his closing words, he said, "Let us continue to help; we must welcome those in need."

The Museum of "Misiones Salesianas" began a new phase last year with the "Indestructibles" and "Feminae" exhibitions. "Over the next four months, groups, organizations, and universities will come to our Museum to participate in workshops with a Culture of Peace approach; we want to promote a diverse society," said Paloma Montero, head of the Education and Culture Department for Global Citizenship.

Mariano García, the Museum Coordinator, explained the reason for this exhibition. "Photojournalism can reach other audiences that do not read newspapers. What would you take with you if you had to leave your country, what would fit in a suitcase?"

A free tour can be booked here.