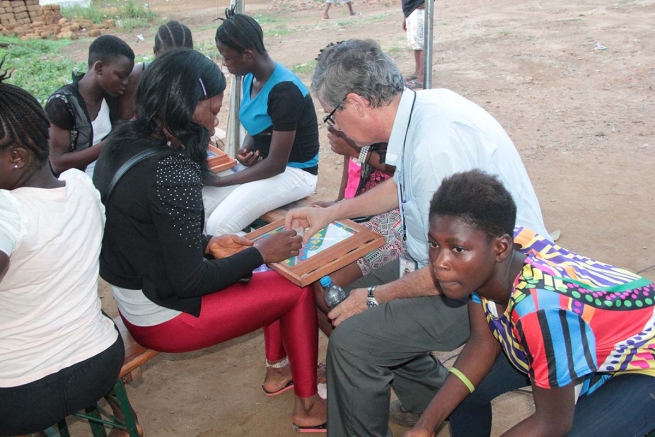 (ANS - Madrid) - The 18th edition of the solidarity awards of the Spanish daily "ABC" gives luster to the work of "Misiones Salesianas," the Salesian Mission Office in Madrid, and to the Salesians in Sierra Leone who are committed to saving girls from prostitution. In fact, the "Girls Os+" program, run by the NGO and Salesian work "Don Bosco Fambul," which for five years has been working to recover underage girls, victims of sexual violence and abuse, who are forced into prostitution to eat and pay for their studies, received the Spanish newspaper's "Solidarity Project Award." Since it was launched, that program has already changed the lives of more than 600 girls and given them the opportunity to start a new existence through education.

What began almost by accident, when he himself asked a group of underage girls who were prostituting themselves on the streets if they did not want to change their lives, if they did not have dreams... became a project in which even the First Lady of Sierra Leone was involved.

For all this, the project was awarded the prestigious prize sponsored by "ABC Solidale," which brings with it a check for 40,000 euros.

"I am very grateful for this award, which gives recognition to all the work behind it: 'Misiones Salesianas,' the social workers, the nurses, the psychotherapists... it is a daily miracle to see these girls come back and smile. This means that they have overcome their traumas and are protagonists of their lives," Fr Crisafulli continued.

A new therapeutic and rehabilitation center, called "New Don Bosco Fambul" and the only one of its kind in the West African region, enables girls to live in a safe environment to overcome their traumas and start a new life. The health care, psychological, spiritual, moral and social support, family atmosphere, caring and gentle attitude, as well as workshops, education and vocational training, and living together with other minor girls contribute to their successful reintegration into society.

The 2018 documentary "Love," produced by "Misiones Salesianas," denounced the situation these girls were forced to have to live through and showed the work of the Salesians to combat mafias and widespread corruption. "We succeeded in getting the minors to be seen for what they are, victims and not perpetrators," Fr Crisafulli recalls. Thanks to the documentary and the testimony of its protagonists at European institutions, Sierra Leone's president decreed a national emergency on child sexual abuse and laws were changed in the country to benefit and protect young victims.

The award also has two special dedications: to Augusta and Aminata, two young people redeemed by the "Girls Os+" program and protagonists of "Love." Augusta, who thanks to this project had been able to realize her dream of starting a small catering business, gave testimonies all over Europe, met the Pope and national presidents, and had become a role model for all the girls of "Don Bosco Fambul." Sadly, she passed away in June 2020, because for fear of contracting Covid-19 she had not gone to the hospital to pick up her HIV medication. Aminata, on the other hand, had been among the most scarred by her past experiences and was the only girl among those recovered by Fr Crisafulli who never completely abandoned prostitution. From the Salesians of Don Bosco Fambul she still received help and accompaniment, but sadly, she was killed in the streets last March.