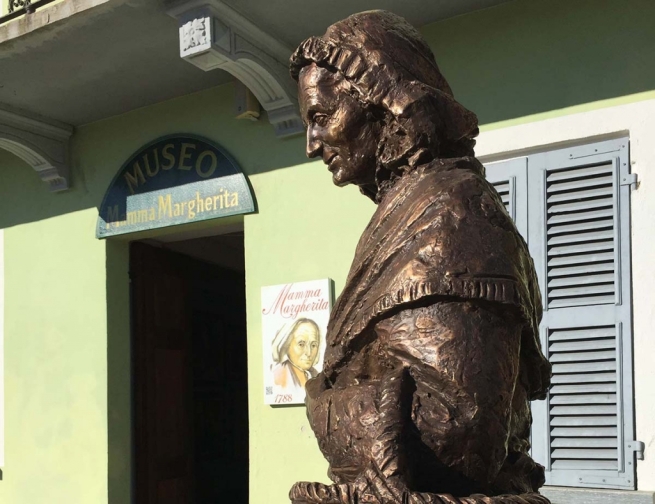 (ANS - Turin) - All mothers are special, but some have had the merit of being able to write a page in human history. Among them is Margherita Occhiena, mother of St. John Bosco, known to all as Mamma Margaret.

“Margherita was a simple, good-hearted, and courageous woman," explains Fr Egidio Deiana, SDB, who delved into her story for years at Colle Don Bosco. "She always distinguished herself for her attention to the different sensitivities of her three sons (the first, Anthony, son of her husband's previous marriage, and her two, Joseph and John) and for knowing how to support them in their vocations without ever being intrusive, indulging them with her discreet presence.”

Mamma Margaret was, however, not only important to the Salesian world, but also to the inhabitants of the small town where she was born in 1788: Capriglio. It was there, in 2006, that a museum was set up in her honor, from an idea of the then-mayor Gian Barberis and Elisabetta Serra, of the Basso Monferrato Astigiano Ecomuseum, chaired in those years by Mario Sacco: they designed the whole project with the help of architects Massimo Siracusa and Giancarlo Transatto, as well as the designer Massimo Braco, who illustrated the topical moments of the woman's life through a collection of peculiar ex-votos. "At that point," Barberis explains, "we involved the locals, who brought us objects that told the story of rural life in those years, the historical and social context in which Margaret had lived, but also family photos and much more."

Inaugurated in 2006, on April 1, Margaret's birthday, the museum stands on the premises where little John Bosco attended his first years of school. "Pilgrims came from all over the world to visit it," Barberis adds, "so much so that in the first year alone we reached 28,000 visitors. It was also a way to make the town known."

Many are the visitors and pilgrims who come to Capriglio to learn about the figure of Mamma Margherita, many the couples who confirm their wedding vows in the Church where Occhiena was married, and many, too, the young people who create theatrical plays about the life of Mamma Margherita.

"These two pandemic years have penalized us," explains the mayor, Tiziana Gaeta, "but it didn’t stop us. In June the museum will reopen and it will be even more beautiful. We renovated the premises, making at least part of it accessible to everyone by eliminating the architectural barriers present on the ground floor. In addition, we wanted to give a more modern approach to the exhibition, and we are already planning to organize temporary exhibitions so that there is always something new to discover. This renovation is meant to be work aimed at expanding a heritage to which we are very attached, both spiritually and historically and socially."