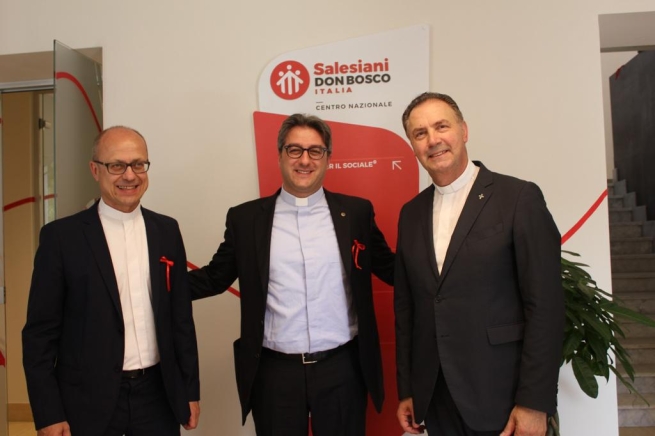 (ANS - Rome) - "When at the beginning of this meeting they started introducing me to all the people, all the representations, all the groups, all the realities ... I thought, 'How much life, how many stories, how many commitments, how much great work, how many dreams, how many projects!' I am convinced that with what we do together we are carrying out a beautiful dream." With these words Fr Ángel Fernández Artime, Rector Major of the Salesians, summed up in the best possible way the reality that has sprung up at Via Giacomo Costamagna, 6, in Rome, inside the Salesian Work "Pio XI," where last Saturday, May 28, the new headquarters of the Centro Nazionale Opere Salesiane (CNOS) was inaugurated.

The event provided an opportunity to gather, in one location, many prominent figures with leadership roles in the vast and rich Salesian universe: among the countless authorities present, in addition to Fr Á.F. Artime: Mother Chiara Cazzuola, Mother General of the Daughters of Mary Help of Christians (FMA), accompanied by Sister Paola Battagliola, Visiting Councilor, and Sister Angela Maria Maccioni, Superior of the Roman Province of the FMA; the General Counselor for Salesian Youth Ministry, Fr Miguel Ángel García Morcuende, and the General Counselor for Social Communication, Fr Gildasio Mendes; the Coordinator of Salesian and Lay Formation in Europe, Fr Fabio Attard; the Rector Magnificus of the Salesian Pontifical University (UPS), Fr Andrea Bozzolo, and the Superior of the Vice-Province "Mary Seat of Wisdom" of the UPS, Fr Maria Arokiam Kanaga; the Salesian Provincials of Italy (with the exception of Fr Igino Biffi, Provincial of Northeast Italy, who flew to Peru to attend the funeral of Fr David Facchinello); not forgetting the leaders of the Salesian centers, protagonists of CNOS, starting with Fr Roberto dal Molin, CNOS President, and Fr Francesco Preite, President of "Salesians for the Social APS."

The day began as scheduled at 11:00 a.m. with the reception of guests and the introductory speech by Fr Dal Molin, who first greeted all those present and thanked architect Paolo Carrino for taking care of the renovation of the premises; and then briefly outlined the path that led to the reorganization of CNOS in this new location. "We are part of a large complex, built in 1928, which for many decades housed an oratory, which is now located in the first courtyard of the work, and which bears the name of the Pope who beatified and canonized Don Bosco, Pius XI," said the religious.

Subsequently, Fr Dal Molin himself, as "host," led the Rector Major and all those gathered in the tour of the new headquarters of CNOS: a vast two-story building that brings together numerous national coordinating bodies of Salesian activities in the territory under one roof.

Specifically, it now houses the offices and staff of:

- Salesians for Social APS, the civil entity that expresses Salesian attention to issues of marginalization and youth distress;

- CNOS Scuola, the association that brings together the 92 Salesian schools in Italy, with more than 23,000 students and 2,000 teachers represented;

- CNOS FAP, the federation of the 63 Salesian Vocational Training Centers in the peninsula, coordinated by 16 regional delegations or associations, which offer technical and vocational education to more than 25 thousand students;

- the coordination of the 125 oratories and youth centers and 103 parishes entrusted to the Salesians;

- the coordination of the 20 boarding schools and 7 university residences of the Sons of Don Bosco;

- the association of Cinecircoli Giovanili Socioculturali, the socio-cultural cinema-related circles for youth (CGS), with 41 member circles committed to developing culture, sensitivity, and critical thinking through cinema;

- the Youth and Social Tourism Association (TGS), with 22 member bodies in promoting an active and responsible way of traveling;

- CNOS-Sport, the body that looks after the Salesian vocation for the educational dimension of sports;

- the national coordination of the Salesian Youth Movement (MGS);

- the coordination of the 5 Salesian university institutes aggregated with the Salesian Pontifical University (UPS) in Italy;

- the site of the Salesian magazine "Note di Pasorale Giovanile, or "Notes on Youth Ministry."

Other rooms devoted to the supervision and accompaniment of national Salesian activities in the areas of Social Communication, Vocational Animation, and Mission Animation complete the structure. And it should not be forgotten that the new CNOS headquarters will also house the Office of Salesian Cooperators of the Region of Italy, the Middle East and Malta, and that of "Don Bosco Formation," the office for the Formation of Salesians and Laity in Europe; as well as a Chapel from which to draw a spiritual recharge to carry on the Salesian mission spread throughout this myriad of activities.

Acting as a common thread between all these environments and spaces of Salesian life is ... precisely a thread, drawn along all the walls and doors of the center, which binds together the various areas of apostolate and which also refers to the celebrated phrase addressed by St. Dominic Savio to Don Bosco: "I am the cloth, you be the tailor."

After visiting, with admiration, all the spaces of the new CNOS headquarters, the Rector Major delivered a brief message, in which he stressed, "Without a doubt, the greatest wealth we have is people: this new house, although it is indeed very beautiful, if it were empty, it would be of no use...." Recalling the mission of CNOS, the Tenth Successor of Don Bosco concluded by noting that it "must have a qualified word to say in society and in the Italian Church, to guide so many decisions in the pedagogical, social and spiritual formation spheres."

The solemn event closed with a moment of fraternal agape organized by the young students of the hotel course of the Vocational Training Center of the "Borgo Ragazzi Don Bosco."