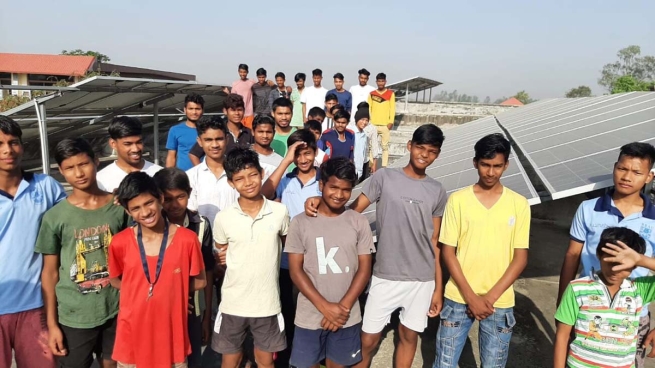 (ANS – Lucknow) – The Salesian house “Don Bosco Ashalayam”, located in Lucknow in the Indian state of Uttar Pradesh, has a new solar panel for electricity thanks to donor funding from Salesian Missions, the U.S. development arm of the Salesians of Don Bosco. More than 200 children currently reside at Don Bosco Ashalayam and benefit from educational and recreational opportunities. Through its presence on the streets and with courses and programs offered in slums and railway stations, Don Bosco Ashalayam provides assistance to street children, child laborers, and at-risk youth. More than 80,000 children have benefited in three decades.

The shelter, where more than 100 children reside, has faced a shortage of electricity supply, and it was difficult to manage the center without regular electricity. Staff members at the shelter often lacked the means to communicate when they could not charge their phones and computers, and students could not study at night. Programs could also not be held at night because of a lack of lighting. This was particularly difficult during times of emergencies. With donor funding, Don Bosco Ashalayam was able to install a solar panel, which powers the center for at least 18 hours.

“We are happy to have a functional solar panel in our center,” said Father Biju Akkilettu, a Salesian with Don Bosco Ashalayam. “The lack of electricity has now been addressed. There were evenings without electricity with children living in the center. It was especially harsh during the summers. Now that children have electricity for longer hours, they are able to focus on their studies. It is also easier for the management to look after the children at night and do their work.”

Salesian programs across India are primarily focused on education. Salesian primary and secondary education in the country helps youth prepare for later technical, vocational or university study. Other programs help to support poor youth and their families by meeting the basic needs of shelter, proper nutrition, and medical care.