Slovakia – "The spirit of Don Bosco in action in everyday life": young people and Salesians committed to refugees 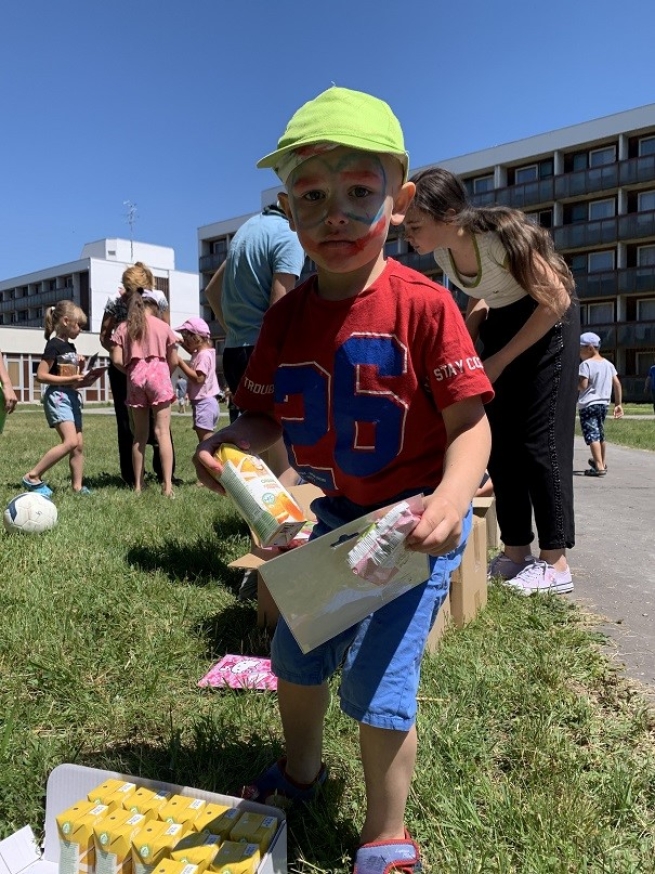 (ANS - Bratislava) - The Salesians of Slovakia, assisted by many volunteers and young people from their works, continue with creativity and a spirit of service to try to give useful and concrete answers to the needs of the Ukrainian refugees in their territory, and especially to those of young refugees. Here are just a few of the many activities carried out in recent days.

During the International Children's Day, which in Slovakia is very much felt and participated in and has a long tradition, volunteers working with the Salesians decided to pay a visit to a state facility that houses many children to give them a few small gifts, but above all their free time. The children enjoyed not only the treats or small gadgets, but especially the time spent together with the volunteers, including dances, songs, games, face painting, and other activities prepared especially for them.

One young volunteer who went to Gabčíkovo, a state-run facility that houses more than 300 children, testified, "I simply played ball with three young children for about half an hour. I was doing just that, but they were absolutely thrilled. I was surprised to see that I could make them so happy with a simple game like this."

The initiative carried out every Friday at the Salesian Oratory in Miletičova, Bratislava, may also seem like a small thing on the surface, but it represents so much for those who benefited from it: on Fridays, Ukrainian mothers who have come to Slovakia with young children know that they can count on the support of other young Slovak women who will take care of their children for a few hours, enabling them to run errands, often including looking for work or dealing with bureaucratic paperwork. "This 'mission' that the local women have taken on for the benefit of other mothers gives a beautiful testimony to the spirit of Don Bosco in action even today, in everyday life," comment the Salesians from the Bratislava Provincial House.

Ukrainian youth are also being supported in completing their education. Violently torn from their schools because of the war, many have continued to attend online classes broadcast live from their old schools. Now that exam time has come for many, the Slovakian Salesians are helping them so that they can take their exams: for example, this was the case with Roman and his fellow students in the hotel courses, who were able to rely on the kitchens of the Salesian work in Žilina to enable them to take the practical test, which was also broadcast live to their teachers in Ukraine.

Happy for all the help they received, the young people welcomed by the Salesians produced a thank-you video.

Finally, special attention to Ukraine was also manifested by the beautiful initiative of the music festival "Lumen," held on June 3-4 in Trnava. Organized by the Salesians and Salesian youth organizations, the festival is one of the largest gospel music events in Central Europe, which gathered this year, in its XXX edition, more than ten thousand young people, to whom it offered, in addition to good music, spiritual workshops, Masses, Eucharistic adoration, penitential liturgies and meetings with various representatives of the church and culture. From the event’s stage, the call for peace and solidarity often resounded, and yellow and blue luminaries were lit throughout the event as a tribute to the Ukrainian refugees.

And also looking to the future, with summer camps and oratory activities awaiting many volunteers in the coming weeks, many young people attending Salesian works are currently enrolled in specific training workshops on how to deal with refugee children.